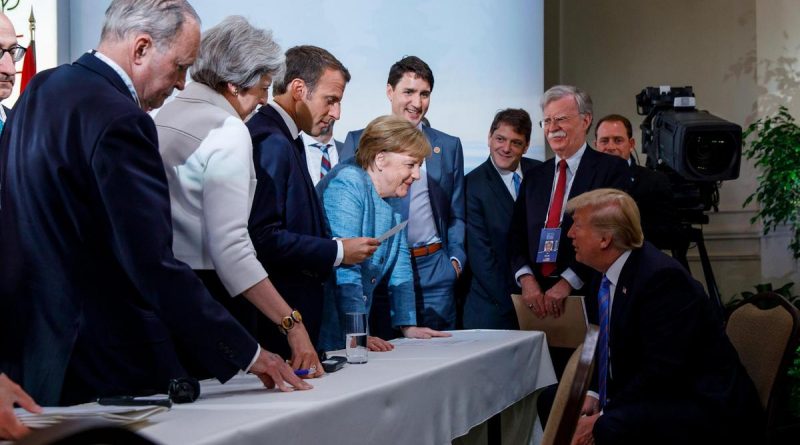 Are We Heading Towards A Trade War?

What is the G7 Summit?

The Group of 7 comprises some of the world’s most powerful leaders: the U.S., Britain, France, Japan, Germany, Italy, and Canada. Though possessing no official authority, their collective decisions are powerful enough to influence global economic growth. Every year, a meeting known as the G7 summit takes place, hosted by the G7 president of that particular year and often with other important global leaders who are invited. This year, Canada holds the G7 presidency and is hosting the meeting in Charlevoix, Quebec on the weekend of June 8th.

Tariffs on the G7 Countries

For the past week, it’s been unsure whether Trump would show up to the meeting. Just last week, he ended the exemption of steel and aluminum tariffs on Canada, Mexico, and the European Union, meaning the tariffs of steel imports from those countries will rise to 25% while aluminum imports will be subject to a 10% tariff. As well, five out of six G7 partners are subject to new U.S. metal tariffs. The decision was naturally met with retaliation from the leaders of the allied countries. French President Emmanuel Macron, for one, called it illegal. During the G7 Summit, the leaders hope to pressure Trump into lifting them, though Trump’s aides say he is unwilling to reconsider the decision.

In response to the whole issue, Canada announced that it would put an estimated $16.6 billion in duties on certain steel and aluminum products as well as other goods in the U.S. such as maple syrup and toilet paper. The EU has also retaliated with duties of their own, and every other country in the G7 plans to launch tariffs in response.

Prime Minister Trudeau and President Macron believe that the trade tariffs will backfire and harm the U.S. economy and workforce. Not only that, but if the issue escalates into a trade war, Canadian workers would be hurt as well. The cost of raw materials would also increase, disrupting supply chains in North America’s advantage and lessening the competition of the steel industry as a result.

An official statement from the meeting of G7 finance ministers was issued, in which it is mentioned that the tariffs “undermine open trade and confidence in the global economy.” However, a trade war can still be prevented at this stage. The G7 countries are expected to bring the topic to discussion during the G7 Summit in hopes of changing the imposed tariffs. Trump has recently arrived in Quebec, where he and Prime Minister Trudeau greeted each other warmly and had a friendly conversation despite their recent exchange of insults via Twitter. Meanwhile, we can only wait in anticipation of the weekend’s results.

Blatchford, Andy, and Mike Blanchfield. “Trump Riles G7: ‘Why Are We Meeting without Russia?’.” CTVNews, The Canadian Press , 8 June 2018, www.ctvnews.ca/politics/trump-riles-g7-why-are-we-meeting-without-russia-1.3965339

Amadeo, Kimberly. “What Is the G7 Summit? Its Members and Summaries of Meetings.” The Balance, The Balance, 13 Dec. 2017, www.thebalance.com/g8-summit-what-is-it-who-belongs-what-happens-3306112.