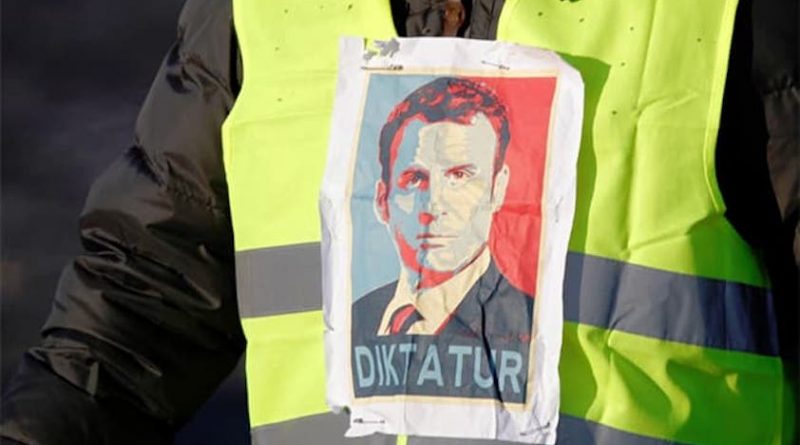 Recent Saturdays in Paris have been plagued with mass protests and riots from a group known as the “Gilets Jaunes,” or “Yellow Vests,” named after the fluorescent safety vests the protestors donned. The originally-peaceful protests began on November 17th as a statement against President Emmanuel Macron’s fuel tax policy. Resentment against President Macron has been growing in France ever since his 2017 election and has finally boiled over in the past weeks.

The origin of the movement can be traced to social media outrage over the fuel taxes. With no clear leader, people from all political and social backgrounds protested in support of the movement. Hundreds of thousands of individuals turned out on the streets of Paris and other major French cities, staging roadblocks in important areas and around fuel depots. However, these gestures soon escalated into incidents of vandalism, arson, and violent clashes with police. Demonstrations shrunk over the next few days, with the majority of people returning to work on Monday.

The following three Saturdays saw resurgences in protests and violence. Police were relegated to use tear gas and water cannons to disperse protesters who smashed shop windows and pulled up cobblestones from the streets. The government blames far-left and far-right “professional protesters” for the violence rather than the majority of protesters themselves.

What do they want?

The aim of the movement was simple at first—the repeal of Macron’s fuel taxes which many deem unfair and exploitative, especially towards people with lower incomes. Over the course of the protests, however, the movement grew to encompass wide-ranging disillusionment with President Macron’s policies.

The protesters believe that Macron is a “hero of the rich” rather than an advocate of France’s working masses. Many in France, especially in poverty-stricken rural areas, have difficulty making ends meet. They point to his 2017 budget, where he cut spending by nearly €10 billion (CAD $15 billion) and gave the rich a €13 billion tax cut ($20 billion) to attract investment in the lagging French economy. For some, the recent fuel tax, supposedly in the name of transitioning away from dirty energy, was simply the final straw that motivated them to mobilise against Macron.

Demands range from moderate appeals for hikes in minimum wages to radical calls for parliament to be dissolved and for Macron to step down. When Macron was elected in 2017 in a close race with right-wing populist Marine Le Pen, many saw him as the lesser of two evils. In November, Le Pen’s National Front once again surpassed Macron’s ‘En Marche!’ in public opinion polls.

Macron was originally unwilling to give in to the protesters. He maintained France’s commitments to reduce its debts to EU standards while rebuilding their economy. On the 11th, however, he finally offered concessions to the angry populace. Reduced taxes on pensions and overtime work were announced in addition to a €100 per month (CAD $151) raise in minimum wage.

Other policies, however, are still set to remain in place. Taxes for corporations and for the rich will remain at their lowered levels. French Finance Minister Bruno Le Maire estimates that the combination of increased spending and lowered taxes will cost France’s government over €10 billion (CAD $15 billion) per year.

This leaves the movement divided at a crossroads—whether to accept Macron’s concessions or to continue protesting for change. What started as a simple dispute over taxes has radicalised to become a large-scale manifestation of anger over government neglect. The Gilets Jaunes have grown to encompass not just low-wage motorists, but trade unions and university students as well. France’s situation is delicate, balanced between a seemingly elitist government and the angry masses who show little signs of stopping.

Associated Press. “The Yellow Vests: Who They Are and Why Their Tax Protest Is a Big Deal.” The Mercury News, The Mercury News, 20 Nov. 2018, www.mercurynews.com/2018/11/20/gilets-jaunes-yellow-vest-gas-tax-protest-france/.

Chrisafis, Angelique. “Who Are the Gilets Jaunes and What Do They Want?” The Guardian, Guardian News and Media, 7 Dec. 2018, www.theguardian.com/world/2018/dec/03/who-are-the-gilets-jaunes-and-what-do-they-want.

Willsher, Kim. “Paris Protest: ‘People Are in the Red. They Can’t Afford to Eat’.” The Guardian, Guardian News and Media, 24 Nov. 2018, www.theguardian.com/world/2018/nov/24/paris-fuel-tax-protest-macron-france-poverty.