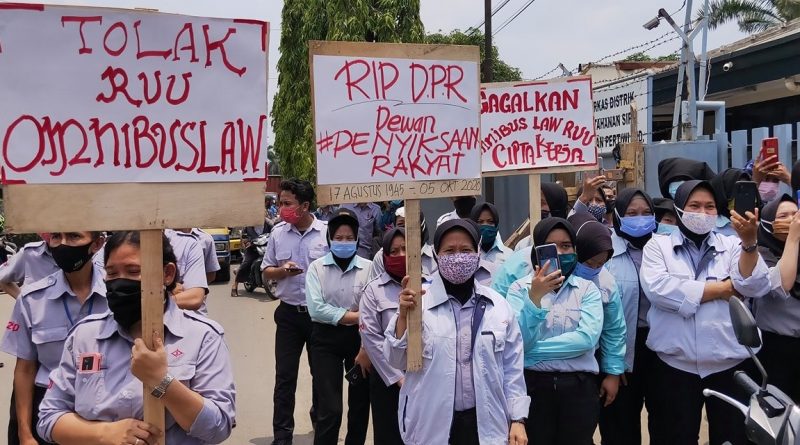 Rallies are currently taking place in Indonesia with hundreds of protestors being arrested for their public objection of the law. Released videos have shown protestors yelling, throwing stones, and setting fire near Indonesia’s national palace in protest. But what caused this public outrage?

What is the omnibus law?

An omnibus law is a general term for a piece of legislature that covers multiple diverse or unrelated topics. The current omnibus law being passed in Indonesia is in relation to job creation and workers rights. With the bill being over 800 pages long and covering multiple aspects of the unemployment sectors, it is being referred to as an omnibus bill. This bill is being put under fire for the controversial policies on jobs that many believe will harm both workers and the environment.

The omnibus law is supposed to attract foreign investment and stimulate Indonesia’s economy by slashing the red tape and becoming more lenient with labour, business, and environmental laws. President Joko Widodo has been adamant on the importance of this bill for the stimulation of Indonesia’s economic growth and for the attraction of the relocation of many global supply chains. A member of parliament in support of the bill claimed that the new bill will “create jobs and attract investments from within the country and abroad, that [it is] expected to increase the prosperity of the [Indonesian] people.” The bill was passed on October 5th with the support of seven out of the nine major political parties in Indonesia.

The bill covers a range of policies with amendments being made to 79 existing labour and bureaucracy laws. The law begs the question of which is more important: the treatment of the people and workers or the economic prosperity of Indonesia. To understand the bill, it is important to understand who and what the new legislation impacts. The key changes the bill will make are the abolishment of a sectoral minimum wage, with wages instead being decided by regional governors, and increased overtime,  with a maximum of 18 hours per week and a one day reduction from the previous requirement of two days off. The bill will also reduce severance pay to a maximum of 19 months instead of the previous 32 and relax environmental standards unless a business is deemed to be a high risk for environmental damage.

The policies that benefit businesses and promote investments can be extremely damaging to both workers and the environment. The Indonesian working class has been leading the protests with other larger organisations also demonstrating their displeasement, notably including the International Trade Union Confederation (ITUC) who stated that they believe that the new bill will target job safety, cut wages, and remove many workers’ protections. The bill is especially controversial due to the pandemic and how hard Indonesia has been impacted by it. Indonesia has the third highest death toll in Asia from the coronavirus and this new law will greatly impact the poor, who are already the most at risk demographic.

Environmentalists have also been active protestors of the bill. They worry about the damaging impacts with the relaxation of environmental regulations. Indonesia is already facing major issues of deforestation due to their large palm oil industry. With the new bill stating that only high risk companies will need to do environmental assessments, uncertainty continues to grow on the size of damages this bill can create.

The Indonesian government and their reaction to the protests

CNN, Analysis by Helen Regan. “Analysis: Indonesia Is Putting Business before the Environment and That Could Be Disastrous for Its Rainforests.” CNN, https://www.cnn.com/2020/10/12/asia/indonesia-omnibus-law-environment-intl-hnk/index.html. Accessed 14 Oct. 2020.