The Bridge Between Russia and Crimea

In 2014, the Ukrainian government failed to sign an agreement that would have brought the country closer to the EU, sparking pro-EU demonstrations across the western part of the country. The neighboring Russian Federation under President Vladimir Putin capitalized on Ukrainian instability to seize and subsequently announce the annexation of the Crimean Peninsula. Ukraine closed the only land entrance into Crimea, hurting the already weak economy of the region. Crimea was part of the Russian Empire and later U.S.S.R. for centuries before it was given to Ukraine in 1954. The region still has a large ethnic Russian population, and it was under the pretext of helping ethnic Russians that the annexation took place. Russia’s actions earned it the ire of the international community, including the United States, EU, Canada, and most other western nations who decried the annexation as illegal and a serious breach of sovereignty. These countries launched a series of crippling sanctions on Russia which were meant to hit Crimea disproportionately hard.

Instead of being cowed by the international pressure, the Russian government decided to double down on their already significant investment into Crimea. Billions of Rubles were pumped into Crimea to make it a cost-effective investment while the rest of the nation fell into a recession. One of the projects undertaken to this end was the construction of a bridge linking Crimea and Russia (the two are separated by the Kerch Strait). The hope for the Kerch Bridge, is for it to ease the transportation of goods and people to and from Crimea, causing a boost to the battered economy of the peninsula. Now that construction of the Kerch Bridge is nearing completion, many in the international community have taken its existence as a physical representation of Russia’s resolve to hold onto the Crimean Peninsula.

This perceived intention and the hope of economic opportunity has been taken well by Crimeans, but has worried western nations and especially Ukraine. In response, a new round of sanctions on Russian officials and businessmen involved with Crimea and the bridge have been launched by western nations. The Ukrainian government still maintains that the Crimean peninsula is theirs, and that all Russian construction in the region, particularly Kerch Bridge, is illegal.

The bridge, already costing 4 billion dollars, boasts an already-completed four-lane highway, as well as a two-way rail line that is expected to be completed by late next year. The Bridge received the personal patronage of Vladimir Putin, and was protected from the many budget cuts that have been typical in recent years of the Russian government. Some reports even suggest that the construction of new automobile roads across the entirety of Russia had to be suspended at one point to continue funding the bridge construction.

The Ukrainian Government fears that the completion of the bridge may decrease shipping to some of its major ports by almost a third. The Ukrainian government hopes to regain the Crimean Peninsula, though the country still faces significant internal strife.

The Kerch Strait with the new bridge 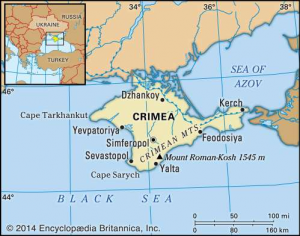 Horton, Alex. “Putin Made a Show of Crossing the New Crimea Bridge. But He Was Upstaged by a Cat.” The Washington Post, WP Company, 16 May 2018, www.washingtonpost.com/news/worldviews/wp/2018/05/16/putin-made-a-show-of-crossing-the-new-crimea-bridge-but-he-was-upstaged-by-a-cat/?noredirect=on&utm_term=.542833b1dfc5.