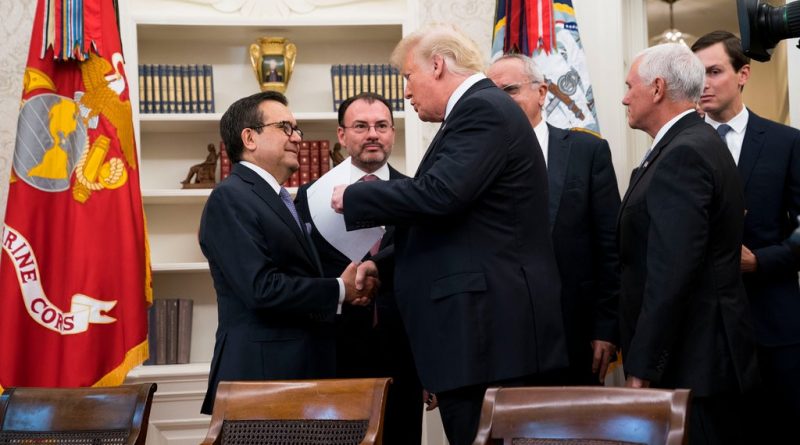 For more information on NAFTA, please refer to Edition 2 of the Blueprint – “NAFTA Negotiations Ongoing Between Canada, U.S., and Mexico”.

After months of tough NAFTA negotiations, self-proclaimed master negotiator President Donald Trump finally has something to show for it. On August 27th, a preliminary US-Mexico trade deal was agreed upon by representatives of both nations. President Trump touted the “really good deal” as a bilateral agreement that could entirely replace NAFTA – putting the pressure on Canada to finish negotiations with the US or risk being left out.

This deal focuses on one of the most contentious topics in US-Mexico trade: the automobile industry. Under the new deal, at least 75% of a vehicle must be produced North America in order for the vehicle to be tariff-exempt, compared to 62.5% in the old NAFTA. To make American (and Canadian) industry more competitive against low Mexican labour costs, between 40-45% of the automobile must be made by workers being paid at least $16 USD per hour, which also has the effect of appeasing anti-NAFTA labour unions.

The US and Mexican Response

Although President Trump is confident his deal will successfully replace NAFTA, other Americans aren’t so sure. For the past 30 years, the US-Canada Free Trade Agreement has allowed goods and parts to flow freely across the border – American industry leaders state that putting tariffs on Canada’s goods and parts would ruin crucial parts of manufacturer’s supply chains.

Likewise, Mexico’s President Nieto is happy about the progress made, but still hesitant about Trump’s willingness to forsake Canada, repeatedly expressing his wish that “Canada will also be able to be incorporated in all this” during his joint announcement with Trump. On the other hand, Mexico’s Foreign Minister Luis Videgaray Caso stated that the US-Canada relationship is beyond Mexico’s control and that it would be unwise to put Mexico at risk by waiting for Canada, leaving Mexico’s stance uncertain.

The pressure is now on Canada to complete the deal by October 1st or risk being shut out of the deal completely – if the deal is signed any later, the US Congress would lack the necessary time to approve the changes before Mexico’s new President Lopez Obrador takes power, which could require renegotiations due to his leftist populist (therefore anti-NAFTA) policies.

A day after the joint US-Mexican announcement, Canadian Foreign Minister Chrystia Freeland arrived in the USA to resume talks with the US Trade Representative, Robert Lighthizer. So far, not much has been revealed by either party, but Canada still insists on three key points for a new NAFTA: the continuation of a dispute resolution system (which has often ruled in favour of Canada in the past), special protections for Canadian cultural industries such as publishing or television, and the continuation of its dairy supply management program which sets fixed prices for goods and puts heavy tariffs on foreign imports.

Although Canada has been unwavering on their key demands throughout negotiations, concessions might be required if Canada is to meet the October 1st deadline against an equally stubborn US. However unlikely it is for Congress to actually approve Trump’s plan, a trade agreement without Canada would likely be the end for the North American trade alliance as we know it.

Bryan, Bob. “The US and Mexico Just Announced an Agreement to Overhaul NAFTA – Here’s What’s in It.” Business Insider, Business Insider, 27 Aug. 2018, www.businessinsider.com/us-trump-mexico-nafta-trade-deal-auto-agricultural-details-2018-8.