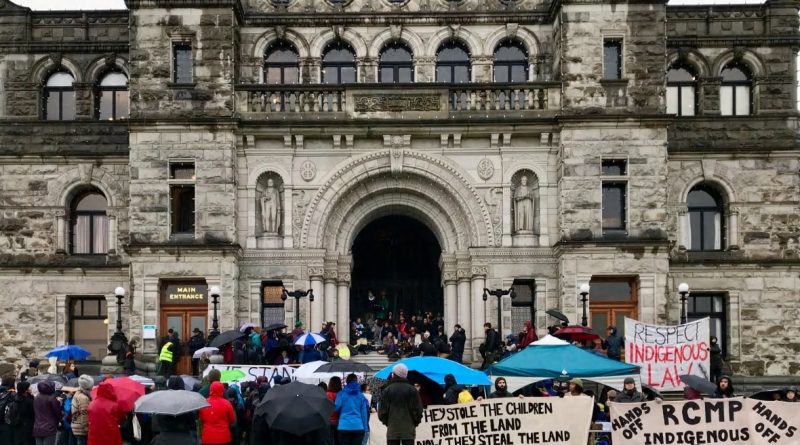 There are two types of leadership within the numerous First Nations people throughout Canada. The first are the hereditary chiefs, which, as the name implies, is a role passed down from generation to generation. Their job is to oversee and manage the traditional and ancestral territories of their tribe, a role that predates colonialism. The second are elected councils that look after legal responsibilities and manage of the land. This role was established in Canada by the Indian Act of 1876 as a means of structuring their communities to be more similar to a western bureaucratic structure. These dual roles of leadership are still in place today and serve as the basis for the tension and conflict fueling the protests.

Recent protests revolve around a new Coastal GasLink pipeline that stems from Dawson Creek—close to the border of Alberta—and extends to Kitimat on BC’s coast. The proposed route would go through Wet’suwet’en territory. While the elected council of the tribe agreed to have the pipeline be built along with some other Wet’suwet’en people as they believe it will bring some much needed revenue, the hereditary chiefs are against it as they believe it will be too damaging to local ecosystems and sacred sites. While normally, according to the Indian Act, the decision would be in the hands of the elected council, however, issues have been revitalised that make this decision more difficult. Technically, the Indian Act took power away from the hereditary chiefs and gave it to the elected council, assuming the community ceded their land to the government. While the land was still theirs, much of the management of it would be transferred to the elected council and federal government. Much of the First Nations land in BC, however, including the Wet’suwet’en land, was never formally ceded to the government. As such, the management would still be in the hands of the hereditary chiefs. This caused much tension within their community; although the elected council usually makes legal decisions and  wants the pipeline to be built, the power was never formally ceded and the pipeline would run through sacred territory, so the decision lies more in the hands of the hereditary chiefs, who are against its construction.

Canadians all across the nation have taken to protesting in solidarity with the hereditary chiefs—many people, regardless of their ancestry, support the ancestral rights of the First Nations peoples. These protests have come in many different forms across the country. For example, in Ontario, many protesters blocked the Canadian Pacific Railway and the Canadian National Railway by protesting on the tracks to hinder transportation. Here in BC, protesters have also blocked some trains from departing or entering the BC Parliament on February 11th, the day of the Throne Speech. While police were called in to intervene, there has been little to no aggression or violence between the two groups. The main demand of the protesters is that the BC and Canadian government recognise the right of the hereditary chiefs, who have also asked for at least a rerouting of the pipeline—however, the company building it says it is too far a detour. Moving forward, talks commenced on how to deal with the situation. But the talks are not only between the Wet’suwet’en people and the governments, there are also internal discussions internally to reevaluate the power dynamic of the hereditary chiefs versus the elected council.

“Wet’suwet’en and B.C. Government Have Been Talking Aboriginal Title for a Year.” CHEK, 17 Feb. 2020, https://www.cheknews.ca/wetsuweten-and-b-c-government-have-been-talking-aboriginal-title-for-a-year-2-647554/.