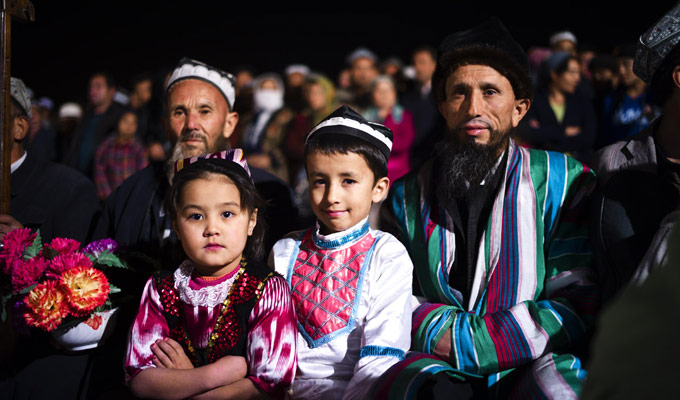 Who are the Uyghurs?

The Uyghurs are a Turkic-speaking people in interior Asia, mostly inhabiting the Uyghur Autonomous Region of Xinjiang in northwestern China. In the early part of this century, there were around 10 million Uyghurs in China alone. Their group is among the oldest Turkic-speaking groups in central Asia, having established a kingdom in modern north-central Mongolia in the eighth century and later migrating to the area around Tian Shan, a large system of mountain ranges in Central Asia. They have lacked political unity in recent centuries but had a brief period of revolt against Beijing in the 1900s. The Xinjiang Uyghurs are Sunni Muslims, one of the two major branches of Islam and the majority denomination.

After the autonomous region was established, large numbers of Han (ethnic Chinese) people moved into the province in the 1950s, eventually making up two-fifths of Xinjiang’s population by the latter parts of the century. Accumulating economic differences and ethnic tensions have brewed protests and unrest.

What’s Going on in Xinjiang?

The Uyghur people are reported to have a history of discrimination since parts of their population resisted China’s rule back in 1949, which continues to escalate today. It has also been reported that some refuse to speak Mandarin to advocate for independence. Anti-Han and separatist attitudes arose in Xinjiang in the 1990s, occasionally escalating into violence. Reported discriminatory and oppressive policies have led to protests. A mass surveillance network is stated to span the province. People who speak out against the government are sent to detention centres and vocational camps, thought to be political re-education centres and concentration camps. Uyghurs who have escaped relay physical, mental, and sexual torture. Campaigners think China is attempting to exterminate Uyghur culture.

Chinese news outlets say that the accusations against the “anti-terrorism, de-radicalisation, and human rights situation in Xinjiang” are unfounded and slanderous, interfering with China’s internal affairs and damaging to Xinjiang’s ethnic people groups. The Xinjiang Uyghur Autonomous Region expresses “strong condemnation and firm opposition.” The “so-called ‘mass detention of ethnic minorities’” is denied, and instead reported as establishing education and training centres to prevent violence and to de-radicalise the religious extremists and those who have committed minor crimes. What has been done is said to be “essentially no different from the ‘community corrections’ introduced by the U.S., the DDP (‘Transformation and Separation’ project established in the UK), and the de-radicalisation centre established in France.”

On February 22, the Canadian House of Commons declared China’s treatment of the Uyghurs as genocide. The motion was first brought forth by opposition Conservatives. Trudeau had told reporters previously that genocide was an “extremely loaded” term, requiring more examination of the situation before a decision should be made. He and his cabinet ministers were absent during the vote, most likely because the on-going negotiations with China about the release of Michael Kovrig and Salvador require extra care in dealing with said country. Conservative leader Erin O’Toole reasoned that the motion was needed to send a “clear and unequivocal signal that we will stand up for human rights and the dignity of human rights, even if it means sacrificing some economic opportunity.” They, New Democrats, Bloc Québécois, and Greens all called for the 2022 Beijing Winter Olympics to be moved if the brutality continues. One week earlier, Prime Minister Trudeau reiterated that reports of abuse were coming from Xinjiang, with rights groups believing that at least 1 million Uyghurs and Muslims have been put in camps. Other Western countries reverberate complaints about China’s human rights record, and the U.S. already accused China of genocide in January, Trump having signed the Uyghur Human Rights Act into law.

On the same day, Chinese Foreign Minister Wang Yi told the UN Human Rights Council in Geneva that Uyghurs and other minorities in Xinjiang enjoy freedom of religion and labour rights. Wang Yi added that 24,000 mosques are allowed to operate in the province, declaring their treatment a “shining example” of China’s human rights progress, with Xinjiang experiencing “social stability and sound development” after four years without any “terrorist case.” The following day, Chinese Foreign Ministry spokesman Wang Wenbin said that the motion “disregards facts and common sense.” The Chinese ambassador to Ottawa, Cong Peiwu, denied accusations of genocide, stating in an interview before the vote that “western countries are in no position to say what the human rights situation in China looks like. There is no so-called genocide in Xinjiang at all.”

On February 25, the Dutch parliament also declared the treatment of Uyghurs as genocide — making them the first European country to do so. Prime Minister Mark Rutte’s Conservative VVD Party voted against the motion; similarly, Foreign Minister Stef Blok said that the government did not want to use the term genocide, as the situation has yet to be declared as such by the United Nations or by an international court. Nevertheless, he expressed after the motion was passed that “the situation of the Uyghurs is a cause of great concern,” and that the Netherlands hoped to work with other countries on this subject.

Hayes, Anna. “Explainer: Who Are the Uyghurs and Why Is the Chinese Government Detaining Them?” The Conversation, http://theconversation.com/explainer-who-are-the-uyghurs-and-why-is-the-chinese-government-detaining-them-111843. Accessed 1 Mar. 2021.

“Who Are the Uighur People and Why Do They Face Oppression by China?” Sky News, https://news.sky.com/story/who-are-the-uighur-people-and-why-do-they-face-oppression-by-china-12033201. Accessed 1 Mar. 2021.