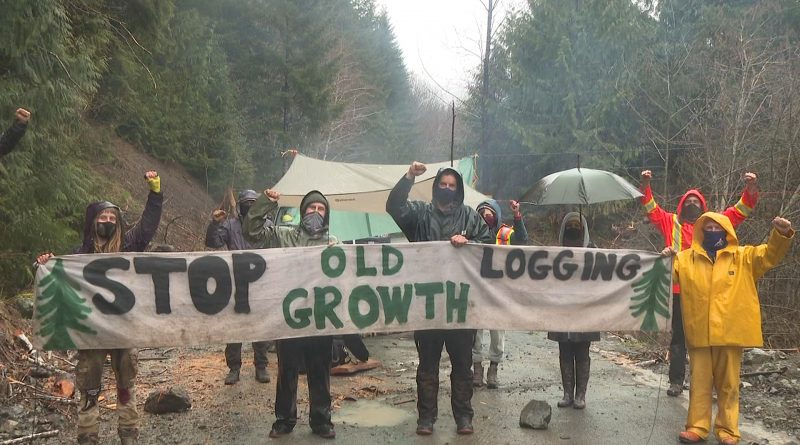 A Brief Timeline of the Protests

The Fairy Creek protests started on August 9th, 2020. Protesters are trying to stop Teal Cedar Products Ltd from logging old growth trees in Fairy Creek by physically blockading the roads that logging trucks use to get there. They are a grassroots organisation that call themselves Rainforest Flying Squad, and they aim to protect all old growth forests on Vancouver Island.

The court issued an injunction to protect the logging company in April 2021, and the RCMP started arresting protesters for breaking this injunction in May 2021. 1114 people have been arrested since, this has caused lots of tension between the protesters and the RCMP. Many protesters went as far as chaining themselves to logs with complicated locks to make it more difficult for the RCMP to remove their blockade.

In June, the B.C. government deferred logging in about 2000 hectares of old growth trees for 2 years, at the request of several First Nations groups in the area. This covers some but not all of the trees that the protesters want to protect.  The protesters have said that this is not enough for them. They want all old-growth trees to be protected.

The Role of the Pacheedaht First Nations

Fairy Creek is on the land of the Pacheedaht First Nation, who have agreed to this logging operation. They have been part of the old growth logging industry for many years, and  have built a factory on their land specifically for processing these old growth trees.

The original injunction ended September 28th, and the B.C. Supreme court chose not to renew it because they felt that it led to illegal acts on both sides. Notably, the RCMP were blocking journalists from freely accessing the blockade, which led to several news outlets suing the RCMP. This reflected badly on the Supreme Court, who issued this injunction.

Since then, the B.C. Court of Appeal temporarily reinstated the injunction on Oct 8th. Teal Cedar Products Ltd has appealed the Supreme Court’s decision, and so the injunction will be reinstated until the appeal hearing on November 15th.

Narwhal, The. “The Fairy Creek Blockaders: Inside the Complicated Fight for B.C.’s Last Ancient Forests.” The Narwhal, https://thenarwhal.ca/fairy-creek-blockade-bc-old-growth/. Accessed 25 Oct. 2021.