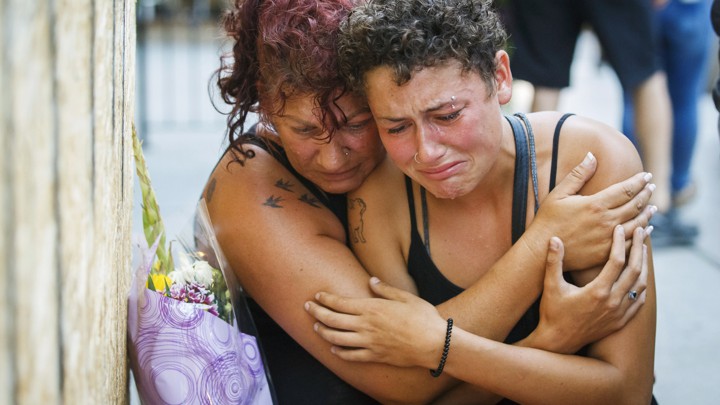 On the night of July 22nd, a 29-year-old gunman opened fire on Danforth Avenue in Greektown, Toronto, killing two and injuring thirteen. This attack shook the entire city –  Mayor John Tory called it an “unspeakable act” and said that “The gun violence in any part of our city is horrible and completely unacceptable.” Hundreds of mourners gathered for a candlelight vigil to honour 18-year old Rease Fallon and 10-year old Julianna Kozis. The CN Tower too was lit with blue and white in support of Greektown’s victims.

The suspected shooter, Faisal Hussain, killed himself during the gunfight with the police. His family released a statement that claimed he suffered from depression and psychosis all his life, which raises concerns on how he acquired a weapon, since in Canada owning a firearm is a privilege unlike in the United States. Any Canadian that wishes to own a gun must submit to a background check, take a safety course, supply two references to the police, and wait 28 days.

However, with this recent incident, Toronto’s city council has passed a motion urging the government to ban handguns altogether. The majority of Canadians already support a complete ban of firearms in urban areas, but this has never led to any new laws, as gun violence isn’t a prevalent issue in Canada. Others believe the regulations in place are sufficient, and there should be a heavier focus on mental health issues, seeing that Hussain also suffered from them.

Following the shooting, the Islamic State claimed, “Faisal Hussain was a soldier of the Islamic State and carried out the attack in response to calls to target the citizens of coalition countries.” However, there is no evidence that the two are connected. According to Rita Katz, director of the SITE Intelligence group, the Islamic has been taking responsibility for any loosely connected attacks due to its losses in Syria and Iraq. The Las Vegas Shooting in the United States, where a shooter killed 58 people when he opened fire in a Casino, is an example; though ISIS claimed responsibility, authorities found no connections between them and the shooter.

Furthermore, many of claimed attacks by the Islamic State have simply been attackers swearing allegiance to ISIS rather than attacks planned by ISIS themselves. Typically, there would be stronger evidence of ties to them, with the attacker having been in contact with an ISIS member. In the recent years, however, they could be claiming attacks without evidence at all, said Amarasingam, a senior Canadian-extremist researcher.

The mayor acknowledges that Toronto has a gun problem and promises to discuss public safety with provincial and federal officials. He also said that authorities would seek justice, even though the suspected shooter is dead. In the meantime, police presence has heightened in the Danforth area and the investigation of why the shooting occurred continues. Tory asks anyone with information, including video surveillance footage, dashcam footage or a cell phone recording, to contact the police.