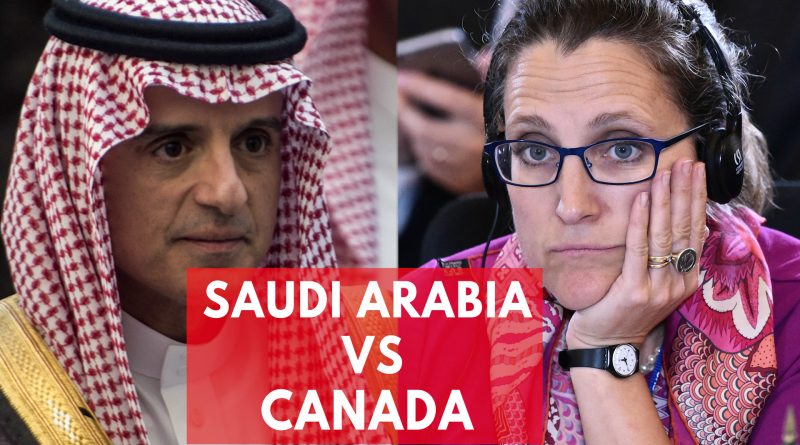 Tweet leads to suspension of trade between Canada and Saudi Arabia

Several human rights activists have been arrested in Saudi Arabia recently, including many high-profile women’s rights’ activities like Samar Badawi. Last week, Canada’s Foreign Affairs Minister Chrystia Freeland tweeted her concerns for the issue, urging them to immediately release Badawi and all other “peaceful human rights activists.” In response, the Saudi Foreign Ministry tweeted back, saying that Canada’s attitude was “an entirely false claim,” and that they should not be interfering in internal affairs.

“Canada has made a mistake and needs to fix it,” said Saudi Foreign Minister Adel Al-Jubeir.

In retaliation, Saudi Arabia has taken drastic measures. They have expelled the Canadian ambassador in the Saudi Foreign Ministry, suspended all educational exchange programs, arranged for Saudi patients in Canada to be transferred to hospitals elsewhere, blacklisted Canadian wheat and barley, and above all, suspended all business and trade between the two countries.

Saudi Arabia is labelled by groups like Human Rights Watch and Amnesty International as one of the worst violators of human rights, and has always reacted harshly to criticism on this topic. However, Saudi Arabia’s reaction can be considered harsh, even in comparison to other instances in the past. Aurel Braun, a professor of political science and international relations at the University of Toronto, says they may be attempting to show other countries the consequences of messing with their domestic affairs. The reaction also goes to show how limited the reforms have been in Saudi Arabia. The new crown prince of the country, Mohammed bin Salman, plans to modernize the country, but so far, the most radical move has been allowing women to drive. Another possibility mentioned by Braun is that perhaps they see themselves as improving, but rather than receiving recognition for their small steps, they are still being criticized.

Is Canada Too Nosy?

Canada believes they did nothing wrong in this dispute. “Canadians have always expected our government to speak strongly, firmly and politely about the need to respect human rights around the world,” Prime Minister Trudeau told reporters in Montreal. “We will continue to stand up for Canadian values and human rights. It’s something that I will always do.”

Some say that the platform on which they chose to reach out to Saudi Arabia was a mistake, as it made the criticism public. Trudeau stands his ground. “In today’s world there is a broad range of communication tools available […] to make statements, and we will continue to use the full range of methods of communication as appropriate.”

The cut in trade and business is not too detrimental to Canada. Saudi Arabia is 17th on Canada’s list of trade partners by total trade volume. Approximately 10% of our oil input comes from Saudi Arabia, and bilateral trade amounts to approximately $3 billion a year. Economists say that the amount is nothing compared to the U.S.’s two-third of imports, and that the amount could easily be covered by the U.S., thanks to growing domestic production.

As for wheat and barley, analysts say that the Middle East has already been importing less from Canada and the U.S. in recent years because of high shipping costs. China is now a much bigger barley buyer, so Canada could easily turn to them for export. In short, though the retaliatory measures taken by Saudi Arabia seem weighty at first glance, a closer look indicates they were more for show.

Trudeau and Freeland say they refuse to apologize for standing up for human rights. “Canada will always speak strongly and clearly in private and in public on questions of human rights,” said Trudeau. Sources claim Freeland has been talking with her Saudi counterparts on Tuesday, so lines of communication remain open. As well, Freeland is apparently calling or arranging calls with other countries in Europe and the Middle East to seek help in resolving the dispute.