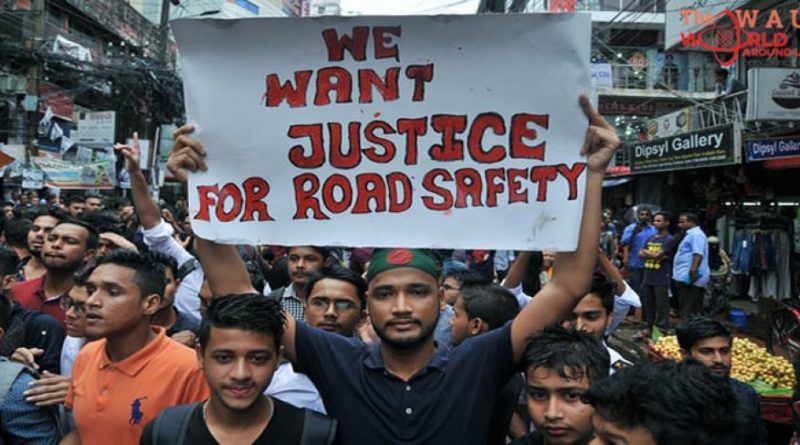 On July 29th, 2018, two schoolchildren in Dhaka were run over and killed by a speeding bus. The driver is believed to have lost control of the bus in attempt to pick up more passengers than another passed. This is a common occurrence in Bangladesh, where over 4,000 pedestrians are killed in road accidents annually. Nonetheless,  this specific accident has led to widespread disdain and anger on social media, resulting in large waves of student protests.

Tens of thousands of schoolchildren have marched into the streets of Dhaka, protesting by blocking off roads and intersections, resulting in halted bus services in the city. These protesters have stopped trucks, busses, and cars, interrogating their licenses and checking if their vehicles are in satisfactory conditions. Their goal, as one 17 year-old states, is for “corruption to be gone and driving licenses to stop being handed out like candy.” However, after days of police and officials have begun to use tear gas and rubber bullets, injuring hundreds of young people.

As violence continued on campuses and residential areas, many members of the Bangladesh Chhatra League (BCL) who engaged in property destruction are now turning towards journalists and reporters. In fact, many reporters have been physically assaulted and threatened to “delete their footage.” In response, the government has also begun cracking down on protestors. Most prominently, photographer Shahidul Alam was charged for criticizing the government’s handling of the demonstrations in an interview with Al Jazeera. The government’s “violent crackdown” on “overwhelmingly peaceful student protesters” have sparked international criticism.

What initiatives have been taken to address the issue?

The Bangladesh government has promised to consider road safety reforms in attempt to appease protesters.. For instance, they have approved the Road Transport Act, which reportedly considers the death penalty for deliberate road deaths. . However, despite these reforms, officials clearly indicate that they want the protests – which have embarrassed Ms. Hasina and her government – to end immediately. In response to the international community’s condemnation of the Bangladesh government’s violence, Ms. Hasina has defended her party by retorting, “Will we kiss them if they advance towards Awami League office?” Regardless of the Bangladesh government’s opinions, it is evident that immediate action must be taken regarding road safety for all of its citizens.