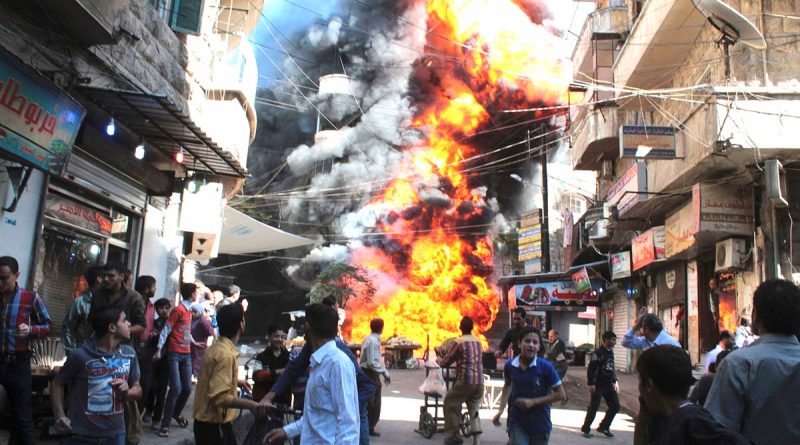 Bread And Circus, Or Lack Thereof

In 2011, Bashar al-Assad was the president and absolute ruler in Syria. His at the time 11 years in power had been marked by a 10 year drought, and a state mandated economic redistribution scheme that took away wealth from the masses and gave it to elites associated with the government.

Also happening in 2011 was the Arab Spring: a series of peaceful protests against the government of countries across the Arab world. These protests had already toppled governments in Egypt and Tunisia before hitting Syria.

The first protest in Syria happened in March 2011 in the city of Daraa in southern Syria after a group of local children were arrested by security forces for graffitiing anti-government messages onto buildings. The protest was peaceful according to reports from those who took part, but security forces responded by firing into the protest, killing 240 people over the course of several days.

Similar protests broke out in northern and eastern Syria, and these protests were likewise met with violence by the government. The goal of the protests increasingly became democratic reforms for the country, and by late August the UNHRC estimates that over 2,000 protestors had been killed.

Armed groups to defend protestors began to pop up as government aggression escalated. On the 27th of September, the first full scale battle took place in the city of Al-Rashtan between government forces and rebel groups under the nominal control of the FSA. Though the Syrian army won the battle, the rebels dispersed  across the country and more armed rebel groups began to appear than ever before. This was the first battle in what would become the long and bloody Syrian Civil war.

The Descent Into Hell Is Paved With Good Intentions

Protests against the government continue to occur across Syria despite the violence; though as time passes, the protests are largely replaced with armed confrontations and battles between the Syrian army and rebel groups like the FSA. While the violence spirals out of control inside of Syria and the death toll rises ever faster, there are many attempts from the international community to stop the conflict.

Both the Arab League (of which Syria was a member at the time) and the UN tried to hold peace summits between rebel leaders and the Assad government, though both sides repeatedly accused each other of negotiating in bad faith and not being trustworthy. In the first three years of fighting, two ceasefires were attempted, one negotiated by the Arab League, and one imposed by the UN. Neither succeeded in wholly stopping the violence, and both fell apart completely within days. Russia and China vetoed any motion in the UNSC that they deemed put Assad in any danger, and therefore crippled any decisive action from the body.

The conciliatory efforts by the international community was just on the surface though, behind the scenes countries had decided which side they wanted to back from the start and were not impartial by any means. Many countries decided to secretly send military and financial aid to the side they were backing as soon as violence started. Saudi Arabia rapidly became a major supporter of the rebel groups in the fight against the government. On the flip side, Saudi Arabia’s regional rival Iran, began to send money and weaponry to the Assad regime. Turkey also began to sponsor its own anti-Assad groups in northern Syria that were separate from the Saudi ones. After several years, however, none of the countries were able to continue to hide their activities and took them public.

With Iran (a primarily Shiite country) supporting one side and Saudi Arabia (a primarily Sunni country) supporting the other, the conflict became more and more about religion in addition to just politics. The vast majority of the Syrian population follows Sunni Islam, while the Assad government is primarily comprised of followers Shia Islam. The build up of religious tensions in the country increased as the violence worsened, and produced and bolstered many radical islamic militant groups.

By March 2013, two years after the first protests in Syria, well over 60,000 people were estimated to have died as a result of the ongoing fighting according to the UN. At the same time, the rebels and the government forces were locked in a stalemate with rebels in control over the northern and eastern parts of the country, while the Assad regime and Syrian Army were in control over most other parts. Possibly as a result of the apparent impasse in the war, a missile carrying deadly and highly illegal sarin gas was fired into a rebel-held area on the outskirts of Damascus (the capital city). Both sides blamed each other for the attack, though many western nations tended to believe that Assad was to blame.

Two months later the military group known as Hezbollah, which is a creation and arm of the Iranian government, began to fight openly on the side of Assad. In a continuing effort to break the stalemate, chemical weapons were used again in the conflict, and the international community took action. Investigators were sent in to confirm that weapons had been used, upon which several western nations began a campaign of limited airstrikes in Syria against the Assad regime.

Soon after the foreign countries began to directly involve themselves and openly take sides in the conflict, the declaration of the Islamic State of Iraq and Syria would force governments around the world to dedicate much more focus to the conflict.

Follow the story in its second part next week…