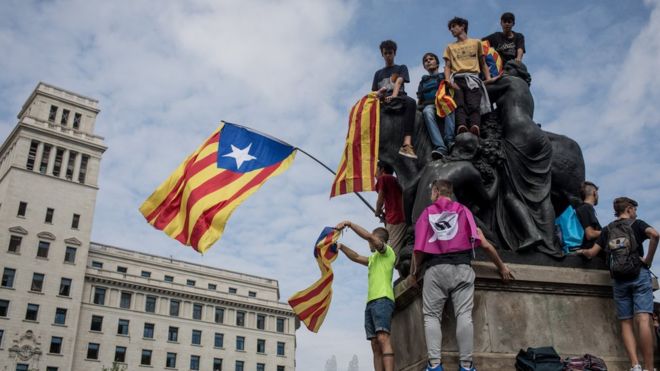 The independence leaders of Catalonia face multiple charges, including rebellion.

After a spreading separatist sentiment in Catalonia, a semi-autonomous northeastern province in Spain, an independence referendum was held on October 1st, 2017. Of the 2.3 million (43 percent) voters, 90 percent were in favour of independence. The Spanish police were ordered to attempt to prevent the vote from happening, with some using force that, according to the Catalan government, left several hundred citizens injured. Despite the resistance, the Catalan government declared independence on October 27th, 2017.

Spain’s Constitutional Court declared the whole process—from the referendum to the declaration of independence—illegal, and invoked Article 155 of Spain’s constitution to impose direct rule. A few leaders of Catalonia, including President Carles Puigdemont, fled the country to avoid imprisonment. Elections were held shortly after in December, leading to Spanish nationalists gaining control. In June of 2018, however, Spanish Prime Minister Mariano Rajoy and his conservative government were ousted in a vote of no confidence. A new socialist government led by Pedro Sánchez was sworn in, thus ending Madrid’s direct rule of Catalonia. Catalan nationalists have now regained power, with Quim Torra, a close ally of Puigdemont, leading its government.

While several Catalan independence leaders stand on trial before Spain’s Supreme Court, one key player in Catalonia’s independence who is not going on trial is Carles Puigdemont, the former President of Catalonia, who is living in self-imposed exile in Belgium. Leading up to the trial, nine of the twelve accused have been imprisoned for several months, with three having spent more than a year in jail.

As for arguments, the defendants bring up how “We are Republicans and then separatists, but above all we are Democrats.” They also remark that none of their demonstrations have been violent. Oriol Junqueras, the former Vice President of Catalonia, claims that “Nothing we have done is a crime and we are innocent of the crimes we are accused of,” and that “I am a political prisoner and I am on trial for my ideas.” The prosecutors maintain the illegality of the secession, citing the “indissoluble unity of the Spanish nation.”

On the day of the trial, tens of thousands of people on both sides gathered to protest. Those in favour of a united Spain donned mainly Spanish flags and chanted “Catalonia is Spain”, as well as that the defendants were “terrorists.” They demanded the defendants be given longer jail sentences and accused the Spanish Prime Minister Pedro Sánchez of being too lenient towards the Catalan independence leaders and movement in general. Meanwhile, those defending the Catalonia independence cited their democratic right, claiming how nothing they did was wrong. Concurring with Junqueras, they stated that the defendants were “political prisoners” and donned Catalan flags showing their support. Quim Torra was there as well to express support of the defendants. Police were at the scene, though only to ensure that no violence began as tensions ran high.

Looking to the future

Catalonia’s independence remains a controversial issue. Due to Catalonia’s influence, having 1/6th of Spain’s population and producing 20 percent of the country’s GDP, whatever happens in Catalonia will greatly affect the entire nation. This effect can already be seen in federal voting, with Spain’s Prime Minister Pedro Sánchez having doubts about the success of his government’s proposed budget. While he promised further talks about Catalonia’s independence, many pro-independent remain resentful towards the government. They will likely vote against the budget which, should it fail, would lead to a government shutdown. In response to this, Sánchez has called a snap election for April 28th, 2019.