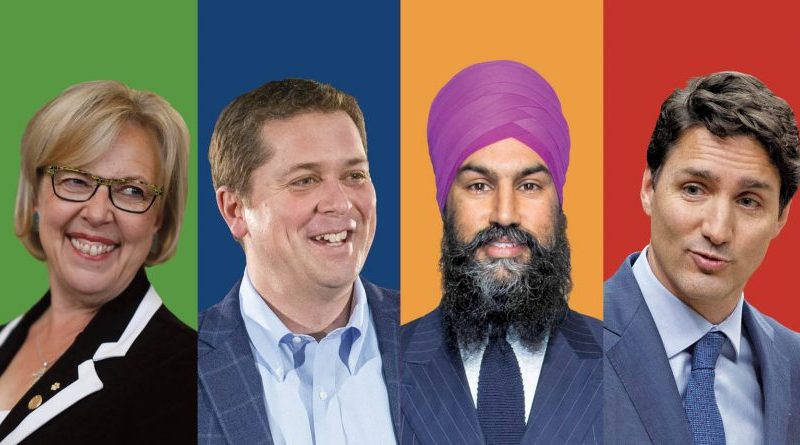 Platforms released, setting the stage for the 43rd election

An Overview of the Election

The 43rd Canadian Federal Election will be held on October 21st, 2019, and the parties’ campaigns are about to begin. The six major parties competing in the election are the Liberal Party, the current ruling party; the Conservative Party, who are currently the Official Opposition; the New Democratic Party, the Green Party, Bloc Québécois, and the People’s Party of Canada. Voting polls continue to show that it is uncertain which party will come out on top.  Some key issues this election are the continued fight against climate change and foreign policy with the United States and China.

The Liberal Party, led by Prime Minister Justin Trudeau, is hoping to win a second term in this election. Their budget forecasts have predicted a decrease in debt in the following years, and they have also seen slowly decreasing unemployment rates, having enjoyed an increase of 80,000 jobs last month. The Liberal Party has promised to ban certain single-use plastics that they deem “harmful” by 2021. Trudeau continues to push the expansions of his controversial oil pipeline, saying that one can “protect the environment and grow the economy at the same time.” They plan to reform the healthcare program into a more affordable universal pharmacare program, and match Canadian Law to the United Nations Declaration on the Rights of Indigenous Peoples, protecting their rights, standards of living, and dignity.

The Conservative Party, led by Opposition Leader Andrew Scheer, released a large part of their platform earlier in the year, ahead of the Liberals. They have vowed to take a hard line against China, promising to exclude Huawei from Canada’s 5G networks as well as reduce trade with China and seek other Asian trade partners. The Conservatives call for closer cooperation with the United States, relocating the Canadian Embassy in Israel to Jerusalem and labelling the Revolutionary Guard of Iran as a terrorist organization. In addition, they opt to negotiate a revision for the Safe Third Country Agreement with the United States, which manages refugees applying for refugee status in both countries. As for protecting the environment, they will repeal Bill C-69, a bill passed during the Trudeau administration that takes climate change into account while assessing whether megaprojects can begin. They claim that the bill has in fact harmed climate change combatting efforts. They have also pledged to set emission limits for major greenhouse gas emitting companies, introduce tax credits to encourage clean energy renovations, incorporate First Nations knowledge into fighting climate change, and revise the efforts to combat invasive plant species.

The New Democratic Party, led by Jagmeet Singh, also released its platform before official campaigning begins. They advocate for the introduction of a national suicide prevention plan as well as declaring a national public health emergency for the opioid crisis. Regarding the environment, they vow to begin low-carbon transit projects all over Canada, ban all single-use plastics by 2022 as part of their Waste Reduction Strategy, and to work towards fitting all houses with renewable technologies and have 100% clean energy by 2050. Similar to the Liberal Party, they plan to make the United Nations Declaration on the Rights of Indigenous Peoples a federal law. However, unlike the Liberals or the Conservatives, they look towards suspending the Safe Third Country Agreement instead of any negotiation, and will also stop all sales of firearms to Saudi Arabia.

The Green Party, led by Elizabeth May, is prepared to take much larger steps to combat climate change. They plan to immediately stop all fossil fuel development projects, fit all Canadian buildings with renewable technology in 11 years, reduce emissions by 60% by 2030, and to create a cabinet with members from all parties to fight climate change together. Outside of climate protection, they strongly oppose any Trans-Pacific or European trade agreements with Canada and they pledge to crack down on gun smuggling and shift towards stricter gun control laws.

The Bloc Québécois, led by Yves François-Blanchet, is once again campaigning for Quéebec Independence. If they are not able to reach their main objective, they propose multiple laws giving Quebec more power, including veto power on oil pipeline projects in the province as well as on federal decisions to expel refugees. They will end the East Energy pipeline project, claiming that “Quebec has everything to lose” from it. In addition, they will integrate the United Nations Declaration on the Rights of Indigenous Peoples into Canadian Law. The Bloc Québécois will push for a “balanced” foreign policy where Canada will not practice military interference unless it is a humanitarian crisis. Regarding climate change, the party has accused the federal government of not taking adequate measures against it, saying that they will introduce a zero emission bill that requires car manufacturers to sell a minimum number of electric cars.

The People’s Party of Canada is led by Maxime Bernier. Saying that the scientific basis over climate change is “uncertain”, they advocate withdrawing from the Paris Climate Agreement, which limits a country’s greenhouse gas emissions. They also pledge to cease funding in developing nations for renewable technology and invest in “mitigation strategies” in response to climate problems. They pledge to continue the growth of the oil industry and continue to work on pipeline projects, as well as to repeal Bill C-69. Finally, they will withdraw from all UN commitments that “threaten our sovereignty”, and work for closer relations in trade and defense with the United States.

Most of the major parties have decided to reveal their platforms early so that there is more to talk about in the upcoming campaign and election. With campaigning beginning and the parties’ commitments unveiled, voters must choose whose ideas they resonate with the most. The leaders of the major political parties have committed to attending multiple debates over the next weeks. The larger parties have extremely close voting poll results, and there is no certain victor. But no matter what the next ruling party is, it will definitely signal a large change for Canada in terms of climate change and foreign policy.