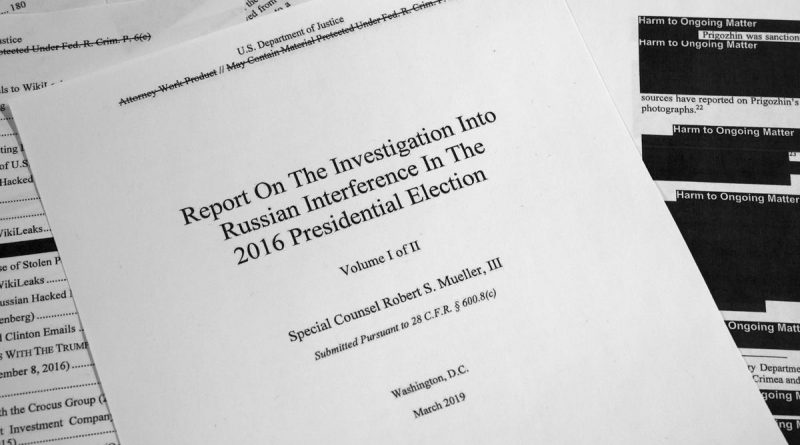 After two years of investigation, President Trump is mostly out of hot water

“NO COLLUSION – NO OBSTRUCTION!” were the triumphant words displayed on President Donald Trump’s Twitter page on April 18th, the day Special Counsel Robert Mueller released his full report. Though Trump’s words are not entirely accurate, Mueller’s report did conclude that Trump is guilty of neither conspiracy nor obstruction of justice—but Mueller did not explicitly exonerate Trump, either. Though the Russia probe itself now poses little threat to Trump, Congress’ investigations into the report could make for a few more bumpy months.

What’s in the report?

The 448-page, two-volume report contains the findings of Special Counsel Robert Mueller and his team’s two-year investigation. The two major topics are: the alleged collusion between President Trump’s campaign and Russian authorities and also Trump’s attempts to obstruct said investigation. The released report has been heavily redacted by Attorney General William Barr; sensitive information, mostly pertaining to ongoing investigations, has been blacked out, sometimes leaving readers uncertain about the message. For the most part, however, Mueller’s findings are clear.

On the subject of collusion between the Trump campaign and the Russian government, Mueller’s report did not recommend charges against Trump. As Mueller revealed in 2018, Russian agencies were involved in the 2016 election. The Russian Internet Research Agency (IRA) “troll factory” created fake online profiles and groups to espouse radical viewpoints and organised pro-Trump rallies. Other Russian organisations stole emails from top Democrats including Hillary Clinton and John Podesta and disseminated them through sources like WikiLeaks, contributing to the controversy surrounding Clinton’s emails in the lead-up to the 2016 election.

Mueller did find that Trump was interested in the results of the leaks, apparently “repeatedly” asking aides to find Clinton’s deleted emails. Business connections to Russia were also discussed, including trusted lawyer Michael Cohen’s attempts to negotiate a Trump Tower in Moscow. However, Mueller states that in general, Trump’s actions did not establish a high level of coordination between him and Russia and they did not engage in conspiracy.

Mueller is more ambiguous on whether or not Trump obstructed justice. The report analysed ten instances of Trump attempting to limit investigations on his alleged collusion with Russian authorities, though subordinates thwarted many of Trump’s attempts. These cases include his firing of FBI director James Comey, attempted firing of Special Counsel Robert Mueller (both of whom served as heads of the Russia investigation), attempts to make former Attorney General Jeff Sessions rein in the Russia investigation, and pressure on key figures such as Paul Manafort and Michael Cohen not to “flip” and help the investigation.

Given the report’s findings, Mueller chose not to give a “traditional prosecutorial judgment.” Mueller did note, however, that he would have exonerated Trump if he could have. He added that Trump may have had other “corrupt motives” for his actions and concluded that “Congress has authority to prohibit a President’s corrupt use of his authority” to protect the integrity of the justice system, leaving another avenue open for Congress to attack Trump.

In the past years, many Democrats hoped that the Mueller report would be the fatal blow to President Trump—which it was not. Regardless, Democrat Nancy Pelosi, Speaker of the House of Representatives, noted that impeachment has not been ruled out. She states that “if that’s the place the facts take us, that’s the place we have to go.” Others, such as Senator Elizabeth Warren, urged impeachment proceedings. With a majority in the House, Democrats could theoretically file an article of impeachment to remove Trump from office. Its success, however, would require bipartisan support in both the House and Senate, which it is unlikely to get given the pro-Trump stance of most Republicans.

In the meantime, Democrats cite Mueller’s stance that “Congress has authority to prohibit a President’s corrupt use of his authority” as reason to continue their investigation. Jerrold Nadler, Democrat Chair of the House Judiciary Committee, has issued a subpoena to Attorney General William Barr demanding the release of the full unredacted report by May 1st, arguing that Barr’s redactions are to protect the President. If Barr does not comply, the matter would likely end up in Federal Court. And thus the Mueller saga drags on.

Tackett, Michael, and Eileen Sullivan. “Reaction to the Mueller Report One Day After Its Release.” The New York Times, 19 Apr. 2019. NYTimes.com, https://www.nytimes.com/2019/04/19/us/mueller-report-live-updates.html.

The Release of the Mueller Report Is Not the End of the Russia Controversy – It’s a New Chapter | Fox News. https://www.foxnews.com/us/the-release-of-the-mueller-report-is-not-the-end-of-the-russia-controversy-its-a-new-chapter.amp. Accessed 23 Apr. 2019.

Mueller, Robert S. Report On The Investigation Into Russian Interference In The 2016 Presidential Election. Mar. 2019, https://www.justice.gov/storage/report.pdf.