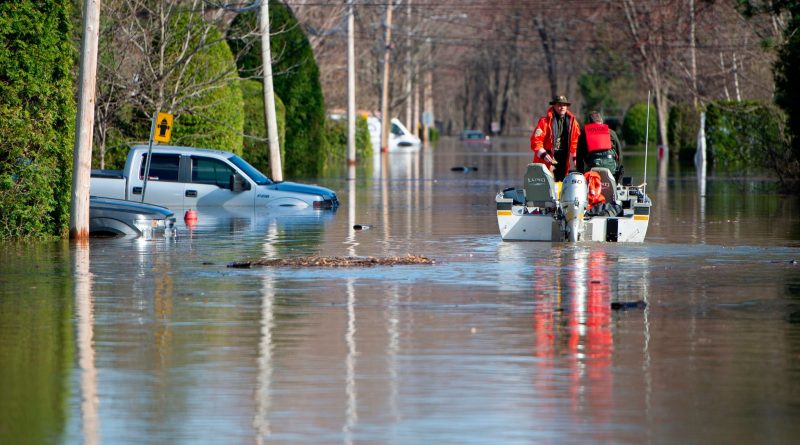 The past weeks have seen the worst floods in decades in the three eastern provinces of Ontario, Quebec, and New Brunswick, prompting thousands of evacuations as water floods homes across the region. Caused by a combination of an unusually large amount of snow and heavy rainfall, these recent floods rival past records set in 2018. As water levels begin to gradually subside, thoughts are turning to the state of Canada’s flood preparedness and how it can be improved.

In Eastern Canada, major rivers have swelled over their dikes and caused thousands of properties to become flooded. Several cities, including Ottawa and Montreal, have declared states of emergency in the wake of the floods.

In Quebec, flooding along the Ottawa and St. Lawrence rivers has been declining since April 30, but potential rainfall has officials worried about a resurgence of water levels. Near Montreal, a dike burst over the weekend and forced the evacuation of over 5000 people, though Montreal’s urban centre remains relatively unscathed.

Southern New Brunswick has been similarly affected by flooding on the St. John river. Though the water is beginning to subside in cities like Fredericton and St. George, officials warn that more time is needed before some 1000 civilians can make attempts to return to their homes.

A large part of Ontario’s flooding has been along the Ottawa river on its border with Quebec and in its cottage country around Bracebridge. Thousands have been evacuated, including the Kashechewan First Nation’s 2500 members. Ottawa itself is under threat, forcing officials to close one of several bridges to neighbouring Gatineau in Quebec.

Hundreds of Canadian forces personnel have been deployed to aid government and volunteer efforts. Together, they protect vulnerable areas and relocate individuals threatened by flood waters. Thanks to the combined efforts, the death toll of this year’s flooding remains at one Quebec motorist.

At the federal level, Prime Minister Justin Trudeau announced that he was open to federal money being used to help people temporarily relocate from their homes. Quebec Premier François Legault pledged $1 million to the Red Cross’ relief efforts. Across all three provinces, there are families staying in government-provided hotel accomodation.

This flood marks the second consecutive year of severe flooding in Canada’s east. At a press conference, Environment Minister Catherine McKenna remarked that “hundred-year floods” are now happening “every five years,” in part due to climate change. Even the conservative-leaning Premiers of Ontario and of New Brunswick, Doug Ford and Blaine Higgs respectively, have acknowledged climate change’s part in the flooding currently afflicting their provinces and the need to take climate change into account in future planning. However, countering the effects of climate change is far easier said than done.

Many Canadians across the country live in flood-prone areas without knowing it. The problem stems from, in the federal government’s own words, Canada’s lack of “effective flood hazard maps” which are essential to flood management. Most are over 10 years old, not digitised, and inaccessible to the average Canadian, lagging far behind the simple-to-use online flood maps of other countries like the United States and the United Kingdom. Due to lack of information and absence of regulation on flood-prone areas, many floodplains have been sites of new residential development over the years, including areas like Richmond and Surrey in Metro Vancouver.

Now, with two consecutive devastating floods, the question is how to minimise the future costs, both in human lives and in billions of dollars. A good start would be to limit the amount of residents in harm’s way. Quebec’s Premier Legault has already offered $200,000 to each household choosing to move out of flood-prone areas. Some argue that it’s still not enough. Without updated flood maps and proper enforcement of development laws, new residences will be created on floodplains. Revamping Canada’s outdated flood maps will most certainly be expensive, but given the new realities of flooding in Canada, the effort could be well worth the money.

Flooding in Eastern Canada — What to Expect as Rainfall Continues | Globalnews.Ca. 26 Apr. 2019, https://globalnews.ca/news/5206439/flooding-rain-eastern-canada-forecast/.

Here’s What You Need to Know about Flooding in Quebec, Ontario and New Brunswick. The Globe and Mail, https://www.theglobeandmail.com/canada/article-springtime-flooding-in-canada-what-you-need-to-know/. Accessed 30 Apr. 2019.

Poor Flood-Risk Maps, or None at All, Are Keeping Canadian Communities in Flood-Prone Areas. The Globe and Mail, https://www.theglobeandmail.com/canada/article-poor-flood-risk-maps-or-none-at-all-are-keeping-canadian-communities/. Accessed 30 Apr. 2019.