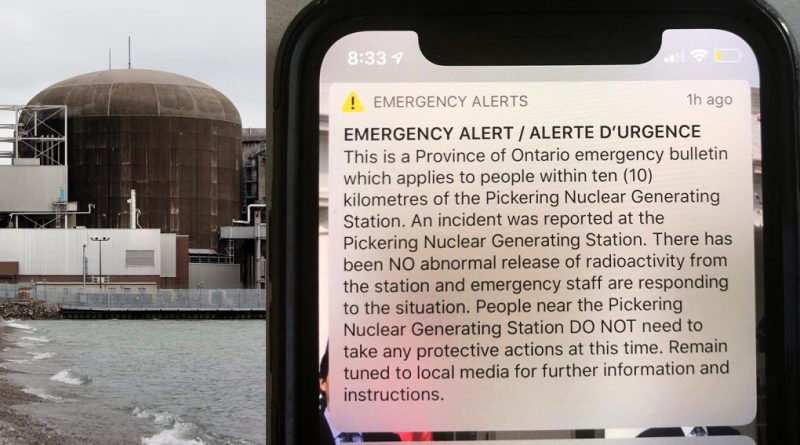 Declining Trust in the Alert System Following This “Unacceptable” Error

Nuclear power contributes significantly to the generation of electricity, providing 15% of all electricity in Canada. The 19 nuclear reactors in Ontario alone generate 13.5 GWe of power capacity. Canada is also a major exporter of reactor systems and radioisotopes for medical uses.

With nuclear energy being such an important yet dangerous source of electricity, alert systems in Pickering, Ontario—where a nuclear plant is located—are tested twice a day to ensure local residents are well informed during an emergency. But when a test alert is sent out to the public, it causes unimaginable terror.

At 7:24 a.m. Eastern time on Sunday, January 12th, the Provincial Emergency Operations Centre sent out a province-wide alert about an incident with the nearby nuclear plant that affects residents living within a 10-kilometre radius. Forty minutes later, Ontario Power Generation tweeted that the alert was an error, but it wasn’t until two hours later that another alert was sent out to reassure the public, followed by a similar tweet from the City of Pickering.

Sylvia Jones, the solicitor general of Ontario, said the alert was pushed on a “live pathway [instead of a] test pathway during a routine training exercise.” Emergency Management Ontario is still investigating the incident, and we have yet to find out who is responsible for the false alarm. The government of Ontario apologised for the incident.

Panic in the City

The false alert stirred up much confusion, as it said there was no abnormal release of radioactivity and that no proactive steps were necessary. It was also a frightening experience for residents of Pickering and, according to one, “put everybody in a panic mode”. Many people scrambled for potassium iodide pills, used to prevent or reduce radioiodine absorption. The city was consumed by shock and terror.

Upon knowing the alert was an error, enraged residents shared their anger and disgust on Twitter. Some demanded answers, others expressed concern for the “waiving [of] confidence in the alert system.” Many people also questioned why it took two hours to reassure everyone of the false alarm. The error was generally thought to be unacceptable, and the mayor of Toronto, equally upset about the unnecessary alarm, called for a full investigation.

Mistakes like this result in the loss of confidence in the alert system and will subsequently impair its effectiveness.

In a real emergency, local and provincial governments would be notified by the Ontario Power Generation within 15 minutes. Air sirens would alert the immediate areas, and the alert ready system (amber alert) along with an auto-dialling system would notify everyone within 10 kilometres of the plant. Emergency Management Ontario would then direct public action and administer the Provincial Nuclear Emergency Response Plan.

The alert system is a major part of the emergency response procedure, and if people lose confidence in the system, it may pose difficulties in carrying out necessary actions in the case of a real emergency.