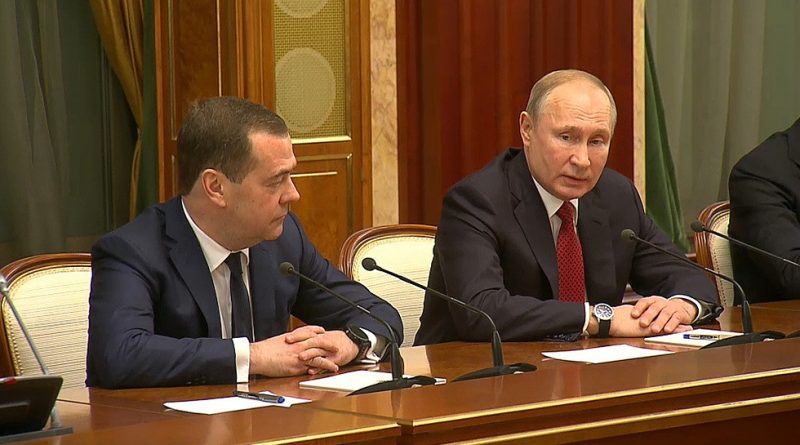 In a shock move on January 15, Russia’s Prime Minister Dmitry Medvedev, alongside the entirety of Russia’s cabinet, announced his resignation. On the same day, at his annual Address to the Federal Assembly, Russian President Vladimir Putin announced his intention to initiate several constitutional reforms which would shift the balance of power in Russia. With Putin’s six-year Presidential term set to expire in 2024, experts are debating whether Medvedev’s resignation plays a larger role in Putin’s plans to retain power after 2024.

Medvedev is regarded as a close ally of Putin. When Putin’s first stint as President was set to end in 2008, due to Russia’s consecutive two-term limit for Presidents, Medvedev was appointed as President while Putin became Prime Minister. In 2012, Putin side-stepped the two-term rule by swapping roles with Medvedev, becoming President once again. This move was seen as undemocratic and triggered widespread protests in Russia, leading many to see Medvedev simply as a tool for Putin to maintain power.

Medvedev’s resignation came on the same day as Putin’s announcement of sweeping constitutional reforms at his Address to the Federal Assembly. Among other reforms, Putin suggested increasing the powers of the Prime Minister. Under the current system, the Prime Minister has a subordinate role to that of the President. Cabinet appointments and defense arrangements are controlled by the President.

With Putin’s proposed reforms, however, the President would lose the power to appoint Russia’s Cabinet. Rather, that power would be transferred to the state legislative assembly, the Duma, which would be advised by the Prime Minister. In Putin’s own words, the President would have “no right to turn down” candidates approved by the Duma. Whether the Duma would be independent of presidential influence, however, is another matter.

Some argue that Putin’s granting of additional powers to the Prime Minister is indicative of his intention to take over the Prime Minister’s role after 2024, when his term expires. With the resignation of the highly unpopular Medvedev and the appointment of his replacement, Mikhail Mishustin, Putin could be attempting to bring about a more pliable successor to Medvedev. Putin would then swap roles again and rule Russia as Prime Minister instead of as President.

Others point out that Putin may be attempting to weaken a potential successor, not wanting another Putin-style strongman as a replacement. After he leaves the presidency, Putin could potentially be eyeing a position on the State Council, which would have its advisory powers strengthened under Putin’s new reforms. As a result, a “retired” Putin would be able to control a weak President, effectively ruling from behind the scenes.

Medvedev claims that he and his cabinet have resigned because they want to give full reign to Putin to carry out his intended reforms. In a televised interview, Medvedev states that he resigned to leave Putin “absolutely free” to make those important decisions “without a backward glance to other factors, including the factor of government.” Whether his resignation was forced or not, it is clear the Medvedev is likely out of the running for a role as Putin’s successor. He has since been appointed deputy chairman of the National Security Council.

The State Duma will likely vote on Putin’s proposed reforms this September. Given the Duma’s penchant for supporting Putin’s policies, the reforms will likely pass. With Putin’s term set to expire in 2024, experts remain undecided as to how Putin will maintain his power after his Presidency ends. With Medvedev and his cabinet gone, however, Putin’s reforms can roll through with ease.