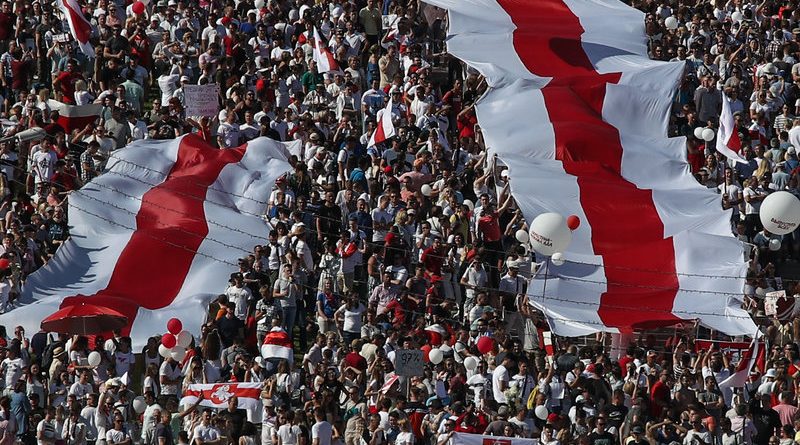 On the morning of Sunday August 9, Belarusians began heading to the polls. The incumbent President, Alexander Lukashenko, was vying for his sixth term. Many Belarusians expected that Ms. Tikhanovskaya, the President’s main opponent, was going to win. She had been holding popular camping rallies in both large cities and the countryside—something that has never happened before in the nation.

The evening before the results were released, an eerie series of information blackouts began. Starting with independent news outlets, then foreign media, and followed by social media platforms such as Facebook. Much is unknown due to this strict blockage.

After authorities announced that Lukashenko won eighty percent of the vote, Belarusian cities became battlegrounds between the police and protestors.

Lukashenko has been president since 1994, supposedly winning five “elections”. Each election was accompanied by protests, arrests, and disappearances. This election has been no different. Harsh police crackdowns are enforced throughout the nation, at least seven-thousand have been arrested, and Lukashenko’s opponents have quickly fled the country. Both the United States and the European Union have called the elections flawed.

Nature of the Protests

Police have been using tear gas, rubber bullets, and stun grenades to repel the protestors, specifically targeting journalists. Medics have been treating those who are lucky enough to be released from detention centres. People are demanding that the country’s authortain leader step down after the fraudulent election. Protestors fear that military force will be used in the coming days, predicting that martial law may be imposed.

Many are now gathering in Minsk, the country’s capital, to mourn the death of protester Alexander Taraikovsky. Police say that he was killed when an explosive device he intended to throw exploded in his hands. Yet his partner, Elena German, said that his hands showed no damage and he had a perforation in his chest, suggesting a possible bullet wound. Many came to see his open casket, exclaiming “long live Belarus”. There are flowers laid in a mass tribute, towering around 1.5 metres tall.

The President has rejected suggestions that foreign mediators become involved in trying to solve the country’s political crisis. In a meeting with Defense Ministry officials, he cited the strength of the constitution as a reason foregin nations were not needed. Although it is unknown, offers of assistance may have been made by neighboring Poland, Lituania, Latvia, and Estonia.

Lukashenko discussed the situation with Russian Premier Vladimir Putin in a phone call last Saturday. A statement from the Kremlin expressed that both nations wish for a quick resolution to the political tensions. Belarus also says that Russia is willing to provide assistance to counter the unrest.

European foregin ministers have discussed the situation in a video conference. They have agreed to place sanctions on officials who are responsible for the crackdown in Belarus.

U.S. Secretary of State Mike Pompeo said that the election fell short of democratic standards. He was glad some protesters were released but feared that it was not enough to bring stability in the nation. Canadian Foregin Affairs Minister François-Philippe Champagne said last weekend that he had spoken to Tikhanovskaya and is “closely monitoring the situation on the ground as we consider next steps.”