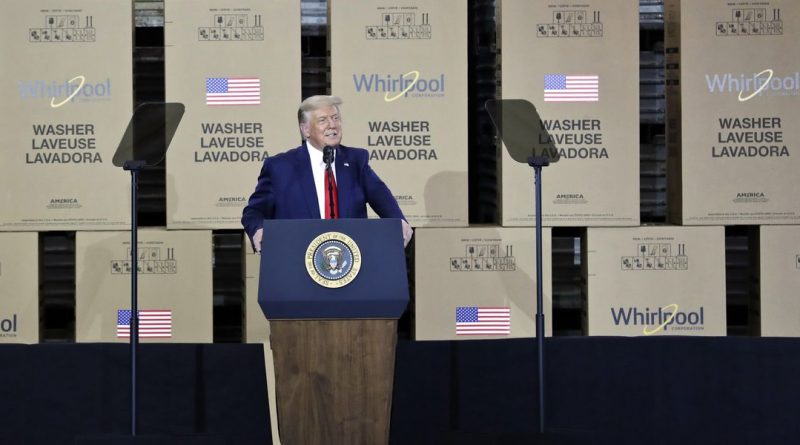 The battle begins once again—but why?

On August 6th, U.S. President Donald Trump announced a ten percent tariff on unprocessed Canadian aluminum that would come into effect on August 16th. During a visit to a Whirlpool appliances factory in Ohio, Trump accused the Canadian government of crippling American aluminum businesses by swamping the U.S. with exports and “dumping*” Canadian aluminum into the market. He restated his election promise to “always put American workers first” and called the tariffs “absolutely necessary” in order to prevent increasing job losses due to falling aluminum prices.

This trade action comes two years after Trump imposed tariffs on Canadian steel and aluminum in 2018 in an effort to protect domestic workers. However, those tariffs were lifted in mid-2019 to facilitate the negotiation of a new free trade deal between Canada, the U.S., and Mexico, which eventually became the United States–Mexico–Canada Agreement (USMCA).

*Dumping refers to selling exports below the international price

The Federal government has expressed deep disappointment over Trump’s reintroduction of the aluminum tariffs of 2018. “In the time of a global pandemic and an economic crisis, the last thing Canadian and American workers need is new tariffs that will raise costs for manufacturers and consumers, impede the free flow of trade, and hurt provincial and state economies,” stated Deputy Prime Minister Chrystia Freeland. Prime Minister Justin Trudeau also spoke out against the tariffs in a Twitter statement, writing: “Canada will impose countermeasures that will include dollar-for-dollar retaliatory tariffs. We will always stand up for our aluminum workers”.

Soon afterwards, Canada revealed its plan to retaliate against the U.S. with its own tariffs on American products such as aluminum bars, paint dyes, and bicycles. After a 30-day consultation with business leaders about potential targets, Canada will impose these countermeasures against the U.S., which are estimated to be worth $3.6 billion.

The tariffs have also drawn backlash from the Canadian provinces. Ontario Premier Doug Ford called for retaliatory action from Ottawa “as soon as possible” and urged Ontario residents to support local manufacturers to push back against the tariffs. Quebec Premier François Legault also denounced the tariffs and stated that he would “fight to defend the Quebec aluminum workers.” Quebec is Canada’s main aluminum producer, with nine of the ten major Canadian aluminum plants located in the province.

The Aluminum Association of Canada (AAC) condemned the reinstatement of the tariffs, calling them “ill-advised” and “undermin[ing] the [USMCA’s] benefits at a time when U.S. businesses and consumers can least afford it”. Additionally, the AAC described Trump’s accusation of Canadian aluminum dumping as “grossly exaggerated”. AAC’s president Jean Simard also warned of the instability the tariffs would bring to the already struggling aluminum industry during the COVID-19 pandemic.

Despite Trump’s support for domestic producers, the tariffs have come under scrutiny from American aluminum manufacturers as well. These businesses are particularly worried about the tariffs’ impact on raw aluminum prices during COVID-19, when an overwhelming number of aluminum companies are forced to operate at a reduced capacity. Previously, American beverage companies (which produce aluminum cans) paid over $582 million in tariffs as a result of the earlier steel and aluminum tariffs imposed by the Trump administration in 2018. The tariffs could also cause an increase in the prices of domestic aluminum products such as cars and home appliances, resulting in American consumers having to pay more during the pandemic.

Attempts at a Re-election Bid?

Critics have accused President Trump of imposing the tariffs solely as an attempt to strengthen his re-election bid. The announcement of the tariffs was made during Trump’s visit to a washing machine plant in Ohio—a vital state if he is to be re-elected. Century Aluminum Co. (an American aluminum producer), which has lobbied for the tariffs to be reinstated, operates two smelting operations in Kentucky—also a key Republican state.