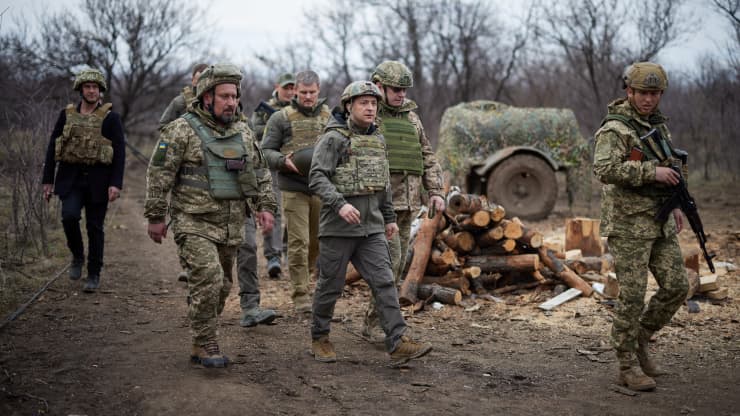 In 2014, Ukrainian President Yanukovych, who had strong ties with Russia, was ousted from office by the Ukrainian Revolution after rejecting a trade deal with the EU. Following his exile, Russian forces invaded Crimea, a peninsula in Ukraine where many supporters of Yanukovych and Russia lived. This resulted in Russia annexing Crimea, inspiring uprisings by Russian backed separatists in the Donbas region. The separatists in Donetsk and Luhansk declared their independence from Ukraine and the Donbas War has since been ongoing.

The Ukraine’s current president, Volodymyr Zelenskiy, has requested NATO accept the Ukraine into their Membership Action Plan (MAP). This is in response to Russia’s amassing troops near the Ukraine border where the conflict in the Donbas region has escalated over the past few months. Since the start of 2021, despite a peace agreement and ceasefire, there have been 24 Ukrainian soldiers killed in comparison to a total of 50 in 2020. “NATO is the only way to end the war in Donbas,” claims President Zelenskiy. Although joining MAP is not full membership in NATO, Zelenskiy feels it would “be a real signal for Russia.”

NATO’s Membership Action Plan is a process that assists aspiring members in creating national programmes that would help guide their country to resolve any issues relevant to their qualifications for NATO (the Alliance). MAP does not guarantee membership in NATO as there are many requirements that must be met, and the Alliance must unanimously agree to the membership. There are three prerequisites for acceptance in MAP: the country must be European, follow democratic principles, and contribute to the security of the Euro-Atlantic area.

Ukraine has some ties to the Alliance; they are currently listed under NATO’s Independent Partnership Action Plan and their Peace Partners. While Ukraine hopes becoming a part of MAP will discourage Russia from further escalating the situation, officials from the Alliance say that Ukraine must first improve their domestic reforms and their “defense capabilities in accordance with NATO’s standards”. With Ukraine’s acceptance into MAP distant, they may have to consider other solutions to end the Donbas War.

President Zelenskiy has talked with many members in the Alliance, namely the US, UK, Canada, and Turkey, about support for getting their membership expedited. NATO’S security general, Jens Stoltenberg, “express[ed] serious concern about Russia’s military activities in and around Ukraine and ongoing ceasefire violations.” Many NATO members have come forward in support of Ukraine’s “sovereignty and territorial integrity.”

Meanwhile, Russia denies supporting the separatists and states that their deployment of troops “poses no threat”, as the troops are only there to secure Russia’s borders. Kremlin spokesperson Dmitry Peskov claims they “doubt that [MAP] will help Ukraine settle its domestic problem” and stated if NATO were to send military aid “this would call for additional measures from the Russian side to ensure its security.” Peskov’s comments make it clear that NATO’s involvement will only heighten tensions, not resolve them.

The head of the Russian-backed separatists in Donetsk, Denis Pushilin doesn’t seem surprised by the recent escalation in fighting. He believes Ukraine is escalating the conflict for financial reasons, that they are “in debt and on the verge of default, and the war is helping to keep it afloat. If the conflict is resolved, there will be no more support from Western partners. And that means the loss of the main source of funding–loans from international organisations.”

The reason for the recent increase in tension and military action is unclear, as is who started it, given Ukraine and Russia are both pointing fingers at each other, claiming the other is the aggressor. Nevertheless, NATO’s involvement will not put an end to this conflict as it is unlikely that Ukraine will gain membership to MAP. However, Zelenskiy’s request has brought some attention to the intensifying war, so Ukraine may receive some outside aid, just not NATO’s.

Ritter, Scott. “Ukraine’s NATO Fantasy Is a Suicide Pill in Disguise; Military Action by the Alliance against pro-Russian Forces Would Be Crushed.” RT International, 8 Apr. 2021, https://www.rt.com/russia/520366-nato-zelensky-ukraine-suicide/.