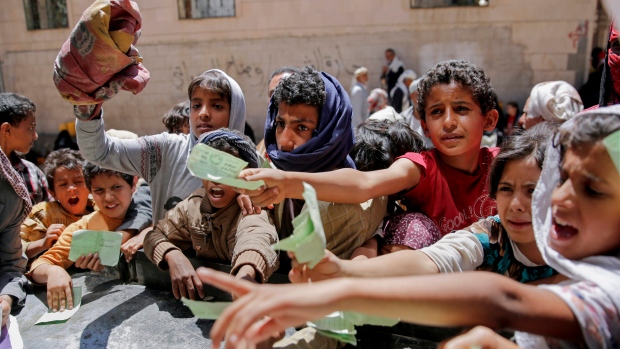 The Republic of Yemen is a country situated on the southern end of the Arabian peninsula. For the last 3 years, it has been embroiled in a civil war,  which the UN considers as the “world’s worst man-made humanitarian disaster.’ The crisis stems from the Arab Spring movement in 2011, which forced the then-president Ali Abdullah Saleh to step down and hand over power to his deputy Abdrabbuh Mansour Hadi. After taking on the presidency, Hadi was immediately facing severe/national issues like government corruption the al-Qaeda movement in the south. The Ansar Allah, which supports the Zaidi Shia Muslim minority in Yemen, took advantage of the chaos to seize the northern province of Saada and the neighbouring areas.

The Houthi movement is an armed religious group, existing since the 1990s. It fought against the then-president Saleh on grounds of financial corruption. Their intentions are to eliminate corruption and to support the Shia Arabs in Yemen, which is predominantly Sunni,

Following the rise of the Ansar Allah, their forces continued to move south, chasing after President Hadi, who had fled to the southern city of Aden after the insurgence of the Houthis. In March 2015, the Yemen civil war began in earnest after the forced departure of President Hadi from the country.

Seeing the sudden rise in power of a Shia group, which is believed to be militarily backed by the regional Shia power Iran despite denials, Saudi Arabia and eight other largely Sunni Arab countries form a coalition to restore Mr Hadi’s government through an air campaign. The coalition receives logistical and intelligence supports from Western countries, such as France, the United States and the United Kingdom.

In August 2015, coalition forces landed in Aden and managed to stop the Houthi rebels and other forces which supported former president Saleh from taking over the port city. From there, the coalition forces drive the Houthi forces out of the south. Nevertheless, Mr Hadi remains in exile, and the Houthi forces maintain a siege on the southern city of Taiz, with their base of operations being in Sanaa. However, extremist groups such as the al-Qaeda in the Arabian Peninsula have also taken advantage of the conflict to seize territory in southern Yemen, further complicating the situation.

Being a religious group in opposition to the Sunni Arabs in Saudi Arabia, the Ansar Allah have also been continuously sending missiles and mortar bombs over the northern border. In May 2017, a ballistic missile was reportedly launched at the capital, Riyadh. This resulted in the tightening of the blockade enforced by the Saudi-led coalition and increase their influence and involvement in the Yemeni civil war.

Recently, the Yemen crisis has escalated significantly with the death of ex-president Saleh in December 2017. Saleh was accused of attempting to ally himself with the Saudi-led coalition by turning “a new page” in exchange for ending the blockade and attacks on Yemen. In response, the Houthis accused him of conspiring against their alliance and launched an operation to take full control of the capital, which resulted in the death of Mr Saleh. Similarly, infighting occurred within the coalition forces in early 2018. Southern separatist groups accused the government of corruption and moved on to attempt to take government facilities and bases in Aden by force.

Currently, battles are focused on the Houthi-controlled port city Hodeida. The conflict is also seen as a regional power struggle between the Sunni Arabs in Saudi Arabia and the Shia Arabs in Iran. Previously, the UN has thrice attempted to hold peace talks and ceasefires – all of which eventually failed or were violated. Casualty figures continue to be estimated and disease runs rampant amongst the Yemeni people. Houthi forces kill and torture their opponents in Sanaa, according to various human rights groups. As it stands, there is no indication of when this horrible conflict will end nor to how it will be resolved. It can only be hoped for that this crisis does not continue to escalate and will quickly be put to an end.