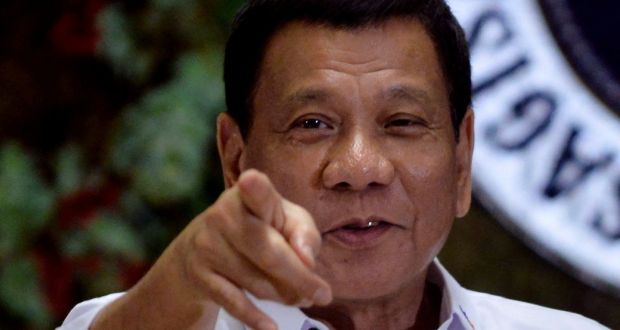 Rodrigo Duterte – President of the Philippines

Despite the fact that the Philippines was once a part of the United States of America, their government and democratic systems are relatively weak. Corruption is widespread and political dissatisfaction is rampant. It’s onto this scene that the bombastic mayor of Davao, who has a penchant for aggressive political statements that push the bounds of the law, takes center stage. During his tenure as mayor of Davao City, Rodrigo Duterte was famous for his uniquely tough on crime stance which allegedly included bands of roving mercenaries that would execute suspected criminals.

Many in the Philippines found Duterte refreshingly honest in a system mired with broken promises and lies. Others regarded Duterte as a man who was sufficiently ruthless, and sufficiently effective at using his ruthless nature, to clean up the Philippines. During the election, Duterte claimed to have killed a man in cold blood while being mayor of Davao, said that he would have joined in on the gang rape of an Australian journalist in the 80s, and promised to kill everybody suspected of using or selling drugs. None of these statements were taken as fact by the Filipino voting population, though they did believe that Duterte would be tough on drugs.

And tough on drugs is only a very light way of describing Duterte’s drug policy.

The War On Drugs: It’s Literally a War

Since being elected two and a half years ago, Duterte has been absolutely brutal. Police in Manila, the capital city, began a campaign of blood and terror against drug users and drug dealers almost immediately after Duterte’s election as President. President Duterte has, up until this point, officially denied being involved with the murders, though during the last week of September he openly admitted that his “only sin is the extrajudicial killings.” The vast majority of government officials deny that any sort of slaughter have had connections to drugs, though official Filipino statistics recognize the killings and have put the number at around 4,500, while some human rights organizations put the number at around 12,000.

President Duterte’s government has taken steps to give law enforcement and security forces even more legal power. It has been recommended that the death penalty be brought back, torture be made permissible again, and detentions for anything suspected of being terrorist in nature last up to 30 days without charges. This is in addition to the recommendation by security officials that the legal definition of what constitutes “terrorism” or “terrorist nature” be scrapped. Such powers would give police, who already abuse their existing powers, the ability to exert even more force and terrorize the population. A preliminary examination of Duterte and his drug policy has been started by the international criminal court.

Despite the rising death toll, the anti-Duterte protests, and the new bill being proposed by the cabinet, Duterte’s approval rating still sits at a solid 75%. The lack of wavering faith from the population, in addition to the rumours about Duterte’s failing health, has created an awkward position for the country. Every time a Western nation has tried to intervene, Russia and China have stepped in to gain the favour of the Southeast Asian nation. With the dwindling influence of the West, the Filipino system of governance is sliding closer and closer to a dictatorship.

Jenkins, Nash. “Why Did the Philippines Elect a Man Like Rodrigo Duterte?” Time, Time, 10 May 2016, time.com/4324073/rodrigo-duterte-philippines-president-why-elected/.

Editorial. “The Guardian View on the Philippines: a Murderous ‘War on Drugs’ | Editorial.” The Guardian, Guardian News and Media, 28 Sept. 2018, www.theguardian.com/commentisfree/2018/sep/28/the-guardian-view-on-the-philippines-a-murderous-war-on-drugs.