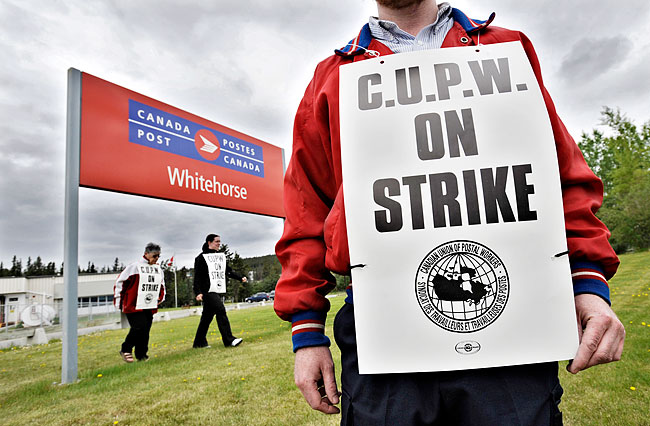 For the past three weeks, postal services across Canada are have faced disruption as the Canadian Union of Postal Workers (CUPW) continues its rotating strikes against its employer Canada Post. Across the country, workers have taken turns walking off the job – a result of the year-long dispute between Canada Post and CUPW which has seen little progress so far.

What are the grievances?

A major portion of the ongoing dispute revolves around the pay inequity between Canada Post’s 42,000 urban workers and its 8000 rural ones. Rural workers, which are over 70 percent female, are paid significantly less than their urban counterparts, which are mostly male. In September, after months of deliberation, Arbitrator Maureen Flynn ruled that urban and rural carriers do the same amount of work yet are paid differently. According to Canada Post’s latest quarterly financial report, this demand could cost the corporation upwards of $250 million.

Other issues include working conditions and wages. The CUPW has accused Canada Post of forcing employees into working overtime rather than hiring new staff. Others point out the lack of a basic pay increase to cover inflation in Canada Post’s latest proposal, let alone additional benefits for workers.

Why go on strike?

The CUPW and Canada Post have been negotiating a renewed contract ever since the previous ones expired in December 2017 and January 2018. Mediators appointed by Canada’s Labour Minister Patty Hadju have worked since January to bring the two sides to an agreement before the August 30th deadline, but were ultimately unsuccessful.

As a result of the lack of progress, the CUPW held a vote between August 7th and September 9th which ultimately resulted in an overwhelming agreement to strike. The strike, which could have begun as soon September 26th, was instead postponed to October 22nd in a failed final attempt to reach a deal.

How are the strikes going?

Unlike a general strike, the recent rotating strikes aren’t a nationwide walkout. Rather, the strikes occur for a few days and alternate between areas, never affecting more than a few provinces at a time.

However, the strikes are not without impact. Canada Post delivers important items such as unemployment and welfare cheques, or even recently-legalised mail-order cannabis. Because of the strikes, major backlogs of mail and parcels occured in important processing hubs such as Montreal and Toronto, causing delays of a few days until the strikes moved elsewhere.

The deadlock on negotiations shows no sign of resolving itself. In the meantime, Canada Post has temporarily cut all short-term disability payments to previously-qualified workers, citing that the necessary premiums weren’t being paid.

This strike is reminiscent of the similar 2011 CUPW strike that ended in a forced return to work. Under the pretext that Canada Post was an “essential service,” the former Conservative government drafted back-to-work legislation, effectively ending the strike. This could happen again under today’s Liberals. Regardless of the outcome, grievances between the Canada Post and its unionized workers are likely to continue long into the future.

Senick, Joel. “Canadian Postal Workers Strike Could Be a Long One, According to Union Official.” Global News, 3 Nov. 2018, globalnews.ca/news/4627189/canadian-postal-strike-could-be-long-union-official/.