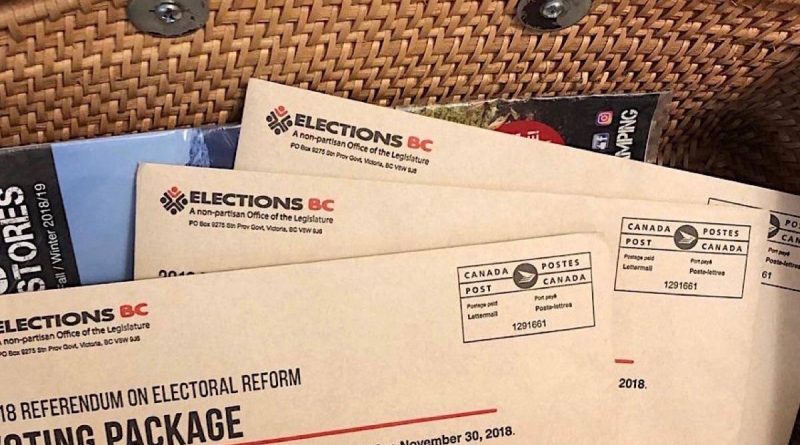 A Call for Change Towards Better Democracy

From October 22nd to November 30th, a mail-in referendum is being held in British Columbia about the province’s electoral system. Voters can choose between keeping the current First-Past-The-Post (FPTP) system and switching to a Proportional Representation system. There are three types of Proportional Representation, which voters are asked to rank according to preference. The referendum aims to form Legislative Assemblies that better represent the citizens.

BC’s current voting system divides the province into 87 electoral districts (also called ridings), each represented by a Member of the Legislative Assembly (MLA). Voters cast the ballot for one candidate, and the candidate with the most votes in each district becomes a representative in the Legislative Assembly. Some other countries that use FTPT include Brazil, UK, and the U.S..

The first type of Proportional Representation is Mixed Member Proportional (MMP). This would separate MLAs into two categories – district MLAs elected through FPTP to represent electoral districts, and regional MLAs elected from a party list as “top-ups” to match the proportion of seats to each party to their proportion of the province-wide popular vote. Regional MLAs would represent groups of electoral districts known as regions. About 60% of representatives would be elected through FPTP, while 40% would serve as top-ups. Current districts would be enlarged to accommodate top-up seats without increasing the total number of seats. Nine countries currently use MMP, including New Zealand and Germany.

The second type is Dual Member Proportional (DMP), in which most electoral districts would merge with its neighbour and be represented by two MLAs. Parties would then list a primary and a secondary candidate on the ballot, and voters would choose one party and their two candidates. The first seat in the district would go to the candidate with the most votes, while the second candidate is chosen so that the party ratio in Legislative Assembly roughly matches the province-wide proportions, similar to top-up seats in MMP. The secondary candidate could  be from a different party than the primary candidate, or from the same party if that party did well province-wide. Large rural districts would not be merged and would keep their one MLA elected through FPTP. DMP has never been used elsewhere before.

The final type is Rural-Urban Proportional (RUP), a combination of Single Transferable Vote (STV) and MMP. Urban and semi-urban districts elect multiple MLAs by ranking as many candidates as they desire on the ballot. Rural districts elect district and regional MLAs through MMP to avoid massive, multi-member districts in sparsely-populated regions. This system has been used in Alberta and Manitoba.

There are advantages and disadvantages to each system. The current FPTP system tends to yield stable majority governments, and the election process is straightforward and familiar. However, it leaves little say for the lesser-known parties, and a large percentage of votes are not taken into consideration. For instance, in the 2017 BC general elections, the Green Party received roughly 17% of province-wide popular vote yet only won three seats because they were only most-popular in three districts. Most of the ballots voting for the Green Party were therefore not counted. Consequentially, people tend to vote against rather than for with FPTP – that is, they may choose the second-popular candidate in an attempt to ensure the loss of the most likely winner, rather than choose a minority party they truly support.

On the other hand, Proportional Representation allows the party ratio in the Legislative Assembly to reflect province-wide proportions with more accuracy. It focuses on the total votes given to a party regardless of whether they won any districts. Small parties would get more seats than they currently do, and would gain more power through coalition governments. In addition, voter turnout could potentially increase when voters feel that their voices are better heard.

BC Premier John Horgan of NDP is an advocate for Proportional Representation, specifically MMP. Meanwhile, the opposition Andrew Wilkinson claims there are too many uncertainties associated with changing electoral systems. To this, Horgan says, “Young people like the idea of working together. If you were woke you would know that pro rep is lit.”

Others believe the answer is ambiguous. As Simon Fraser University political scientist  Eline de Rooji says, “There are no best electoral systems. They are designed for dealing with different issues, and so they do different things. To some extent it’s comparing apples and pears.”