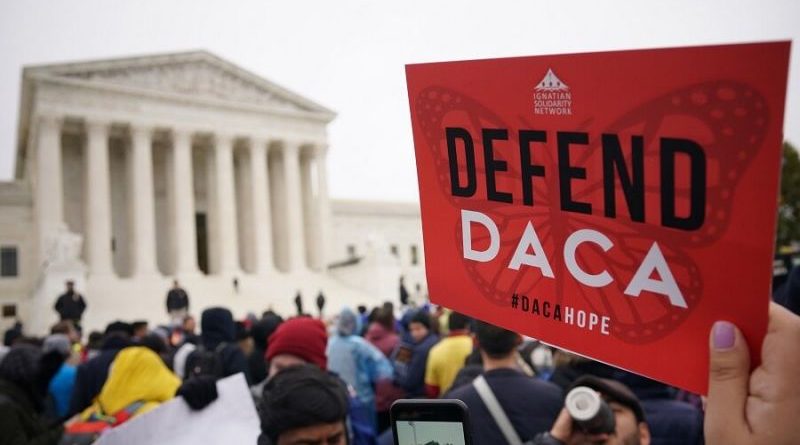 Deferred Action for Childhood Arrivals (DACA) is a program that protects child immigrants known as DREAMers. There are over 650,000 children that fall under this category, and without the program, they are at risk of inability to work and deportation from the United States. The Trump administration attempted to end this legal protection, however, he was met with resistance. On June 18, 2020, the United States Supreme Court rejected his abolition plans and, in the process, dealt a large blow to their anti-immigrant agenda. The vote was a close 5 to 4. Chief Justice John Roberts helped vote against the Trump administration and wrote: “We do not decide whether DACA or its rescission are sound policies. The wisdom of those decisions is none of our concern. Here we address only whether the Administration complied with the procedural requirement in the law that insist on ‘a reasoned explanation for its action.’”

In the past, there has been a lot of opposition against DACA. In 2017, Attorney General Jeff Sessions said that it was illegal, unconstitutional, and should be rescinded. Similarly, former secretary of homeland security, Elaine Duke, released a memo for the rescission of DACA due to its “unlawful” nature. Roberts argued against these claims by pointing out that the memo leaves out the program’s true purpose and advantages: hundreds of thousands of young immigrants would eventually enter the country’s workforce, pay taxes, buy homes, and have 200,000 U.S. citizen children.

In addition, Roberts justified his decision by reasoning that not a single one of the reasons the Trump Administration gave were sufficient, and that they were attempting to avoid responsibility for removing DACA. Instead, they were trying to blame it on the Obama administration who created the program. Immigration law professor Lucas Guttentag agrees with the latter point, asking “why should the court be the bad guy” instead of the Trump administration, who is trying to abolish it.

Trump’s response to the Supreme Court’s rejection came in the form of a tweet on Twitter: “these horrible [and] politically charged decisions coming out of the Supreme Court are shotgun blasts into the face of people that are proud to call themselves Republicans or Conservatives.”

The future of the DACA is still uncertain. Despite this win, the program still seems to face strong opposition. The Supreme Court did decide that the Administration’s attempt to abolish DACA was illegal, however, outside of that fact, it seems as though all the justices believe DACA can be shut down by the administration using proper methods. Immediately, however, DACA appears to be safe from another attempt of abolition from the Trump Administration. This is a strong idea passing through immigrants experts. Before January, they will not be able to shut it down. Cornell Law School professor Stephen Yale-Loehr wrote: “It’s not remotely possible before the election. But if Trump is reelected, he almost certainly will try again.” Until then, young immigrants can still apply for DACA.