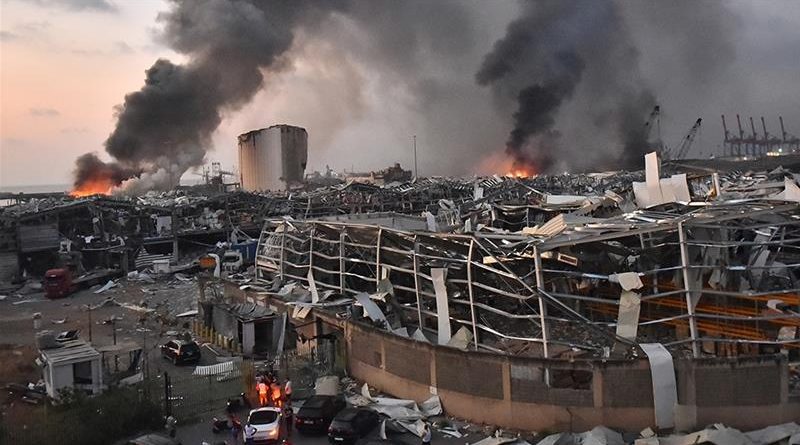 On August 10, 2020, Hassan Diab, the prime minister of Lebanon, officially announced his government’s resignation. This comes in the wake of widespread protests across the country after a massive explosion in Beirut, the capital of Lebanon, on August 4. In his resignation speech, he blamed the disaster on corruption and a number of political elite that had prevented his government from enacting reforms.

In the afternoon of August 4, an enormous explosion rocked the Lebanese capital, killing over a hundred people, injuring thousands more, and leaving hundreds of thousands without homes. The blast caused by the explosive material was equivalent to 1.2 kilotons of TNT, which destroyed many of the city’s buildings and caused an estimated 15 billion dollars in damages. The cause of the explosion was found to be 2,750 tonnes of ammonium nitrate that had been confiscated at the port of Beirut and kept in a warehouse nearby without any safety measures for six years. In addition, Lebanese customs officials had proposed to repurpose the confiscated material to other ends, such as exporting it or providing it to the Lebanese army. However, these requests were ignored by higher-ranking officials and judges. News of this negligence roused public anger, and protestors took to the streets.

Lebanon: A Saga of Misfortunes

The Beirut Explosion is only the latest problem faced by Lebanese citizens, and it served as the last straw for many in their dissatisfaction with those in power. Attempts to deal with the COVID-19 pandemic as well as an economic crisis had highlighted the ineffectiveness of the government to push reforms. In his resignation speech, former Prime Minister Diab asserted that corruption was “deeply rooted in all the functions of the state”, blaming Lebanon’s predicament on corruption and mismanagement of the country, which blocks many attempts at reforms and consequently stalling talks with the International Monetary Fund (IMF) to alleviate the crisis. Ultimately, the explosion in the port of Beirut served to exacerbate the popular anger at the government and the dire situation that the country faces.

What’s Next for Lebanon

The Lebanese President Michel Aoun asked Diab to form a caretaker government until parliamentary elections can be held. Diab’s resignation, however, seems as though it will only complicate matters and perhaps delay much-needed talks with the IMF as well as other faucets of assistance for the indebted country. The sudden end of the Diab government has slowed recovery and given power back to the cronyistic system that the former Prime Minister accused of causing the bankrupting of the nation. While the corrupt clique held authority in Lebanon before the Beirut disaster, no efforts were made to improve citizens’ lives or solve national economic issues and it may be difficult for Lebanese citizens to trust them to make those efforts now.

If Lebanon continues to run under the current political class and system of corruption, particularly with a “second wave” of the COVID-19 pandemic on the horizon, it is unlikely that notable progress will be made to alleviate the issues brought about by the Beirut explosion. Ultimately, reforms will be needed to establish sources of aid, recover from the numerous crises that affect Lebanon, and bring the nation back into a working state.